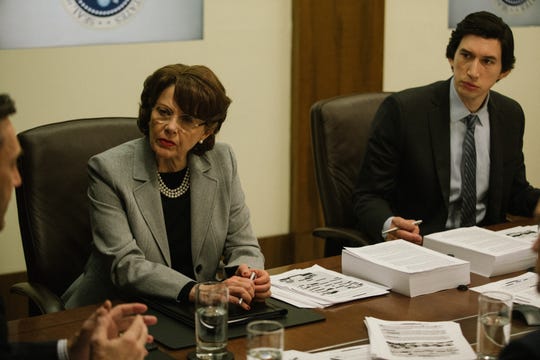 Adam Driver is having one heckofa year.  The Report, The Dead Don’t Die, Marriage Story, The Rise of Skywalker; I didn’t even like all those movies, but he was probably the best part of each, as he is usually the best part of anything he appears in.  Honestly, it’s more than a great year, it’s more like a great early career, the dude’s on fire, and he’s a transcendent talent: Inside Llewyn Davis, Tracks, What If, Hungry Hearts, The Force Awakens, Midnight Special, Paterson, Silence, The Meyerowitz Stories, Logan Lucky, The Last Jedi, BlaKkKlansman.  My critics group just voted him Best Actor and Actor of the Year, he’s the reason you watch a film, and that’s definitely true about The Report, which only works because of him, and then still not all that well.

Following 9/11, American interrogation tactics were escalated, often past the point of moral license.  The CIA was operating in dark sites in foreign countries, their budget was wide open, they were given free reign to use whatever means necessary, and yet the information they gleaned from prisoners was often minimal, repetitive, or completely fabricated.  Under Senator Dianne Feinstein, an investigator named Daniel Jones began the impossible process of sifting through six millions pages of documentation in order to find the truth about the US torture program; how far it stepped beyond the boundaries of international law, how little it ultimately worked, and who knew that we were simply attempting to fight evil with more evil.

Driver is great as Jones, Bening is solid as Feinstein, but that’s where the positives generally end; the rest of the film is a bore in the guise of an esposé.  We’ve seen this type of movie before, many times before, and maybe we’ve even started to get tired of it, unless one comes along out of the blue that takes the genre up a notch.  Spotlight did, but The Report doesn’t, it’s just another trickle of information that we already knew, delivered to us dramatically, but really without much lasting impact.  Driver is excellent and you can feel his passion, but the story itself is too sleepy, has too little music, is honestly missing a little Hollywood, if that’s not too sacrilegious to say.  As it’s Oscar Season, we expect everything that comes out to be an awards-worthy home run, but that’s simply not what we have here, which is fine, but disappointing.