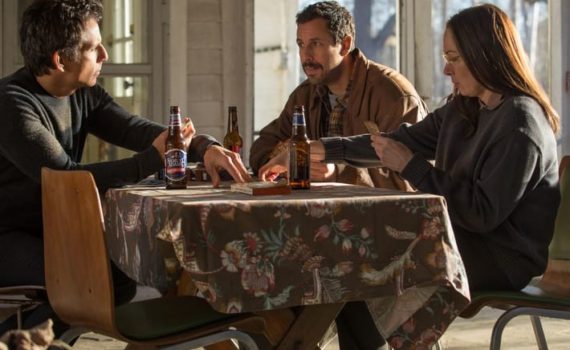 The Meyerowitz Stories is Baumbach’s best film since The Squid and the Whale, his collaborations with Greta Gerwig never being by favorites, always preferring his Wes Anderson-style movies, of course.  This is also Adam Sandler’s best role since Punch-Drunk Love, one of the rare occasions where he actually shows off his immense talent, a well-kept secret that is bafflingly treated like an embarrassment.  Baumbach knows New York, he knows sly comedy, he knows family dysfunction, while Sandler knows awkward conversations, timely laughs, and how to make audiences relate to the bumbling fool.  Together, these men, their coworkers, and this story, combine to delight indie drama aficionados with a film that may quietly sneak toward the top of this year’s list.

The Meyerowitz family is fucked up, to say the very least.  The pater familias, Harold, has been married multiple times, has three odd children, was once a semi-famous sculptor, and now spends his days watching the Mets and feeling slighted for his lack of current success.  His eldest son, Danny, is a stay-at-home dad whose usefulness is completely worn out; his wife left him and his daughter is off to college.  The middle child, Jean, is shy, strange, alone, and fairly uninteresting.  While the youngest, a half-brother named Matthew, has had all the good fortune and is a wealthy wealth manager.  The group reunites when Harold books a small potatoes show for his art and has a health problem, the events working to bring the family together but not helping to alleviate the decades of bitterness that stand between them.

Netflix may have just distributed their finest film to date.  They have been steadily improving, and to book a talent like Baumbach, to produce a movie of this caliber from a director and a cast of this level, is no small feat.  I still feel like I’m somehow cheating the system, I’m watching excellent features from my living room the day that they are released, and they aren’t hitting safely any more, they are swinging for the fences every time.  The Meyerowitz Stories is a standard Baumbach dramody, but aged in such a way that is shouts its improvement, giving us what we want from this talented director by taking every aspect to the next level.  Hilarious in random moments, heart-breaking as it concludes, fraught with dystopic family dynamics that we can all relate to; the film is a pocket-sized, one-dose emoti-bomb.  Sandler was unstoppable, Stiller was in rare, serious form, Hoffman was the perfect fractured father figure, and the supporting cast was cool in its cameoed structure; Emma Thompson, Judd Hirsch, Adam Driver, Grace Van Patten, Candice Bergen.  For those who appreciate the genre, this is A-grade work, and should be considered one of the best films never to be in theatres.