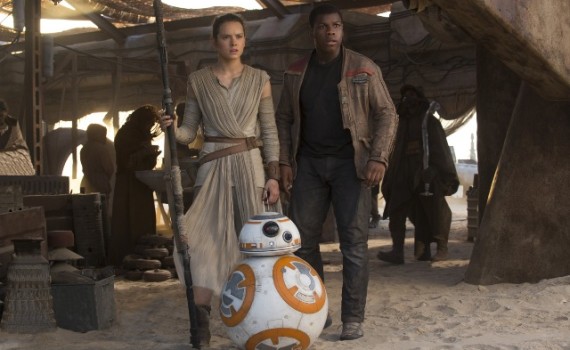 No movie in recent memory has been as colossally anticipated as The Force Awakens.  As each poster, trailer, or image has been given to the country as a teasing gift, audiences have eaten it up & immediately asked for more.  We want Star Wars, we want this world to engulf us, and, for many of us, we wish we had been alive to see the originals in the theatre, to experience such a phenomenon firsthand instead of from VHS tapes handed down to us from our parents.  Episodes I, II, and III weren’t enough to satisfy our desire for this universe, only serving as an appetizer to the main course.  Well, the meat is finally here.  The Force Awakens is a movie event unlike anything I have ever seen, combining the old, beloved stories with the new hype, creating a brand new franchise to drive us wild.  And while I won’t be the critic to knock down something that we all want to hold high, neither was the film a perfect execution.  Instead, it was exactly what we wanted, gift-wrapped and filling a need, but not an original masterpiece by any means.

Thirty years after the events of the war the Rebellion waged against the Galactic Empire, a new threat has arisen, threatening to take over the galaxy the way Darth Vader and the Emperor envisioned long ago.  The call themselves the First Order, led by a hologram of the Supreme Leader, a general named Hux, and a man called Kylo Ren, one strong in the dark side of the Force.  Together, and in the absence of Luke Skywalker, who has fled to remote space for his own secret reasons, these demons & their First Order will soon control the world.  But a Resistance has sprung up, led by the fabled Princess Leia, a movement whose hope is to find Luke, bring him back, and use the light side to conquer evil once and for all.  But first, three adventurers will join together to fight for the good of the galaxy: Poe the pilot, Rey the scavenger, and Fin the Stormtrooper.  They will find old heroes, meet new allies, and defy the First Order with every breath, or die trying.

Visually breathtaking, emotionally stirring, musically genius; The Force Awakens is what we’ve been waiting for since 1983.  It continues the plot of a galaxy far, far away, beginning with the trademark rolling script, ending with a view to future films, and packed in the middle with everything we sat down to see.  Returning characters, old theme songs, classic references, lovable robot, brave heroics, and the constant struggle between light & dark; it’s all there, you won’t be disappointed by the omission of a single nugget of the universe you’ve come to love.  And not only that, but the new elements were crafted to slide right into the gaps, creating a brand new story arc that excites us with new possibilities.  Poe flying an X-wing, Rey holding a light saber; the melding of new with old was brilliant, giving us everything we wanted while bringing the franchise into the modern era.

But before I gush any more, let me bring up the few negatives I noticed, because the film was far from perfect, and I think the filmmakers involved understood this, thinking correctly that it really wouldn’t matter much overall.  John Boyega as Fin was awful, just terrible, over-acting every facial expression under he began bringing down everyone he came in contact with.  Carrie Fisher was almost as bad, with a frozen face, gravely voice, and evaporated talent.  Also, I just hated the Maz Kanata character, felt it was much to convenient, but that may just be personal taste.  The other problems, mainly the bad acting and overuse of shots that worked once but felt tired by the time they were used four times, were a bit more obvious and showed a general lack of execution from a director who was more concerned with pumping out a solid crowd-pleaser, and rightly so.  I can’t blame anyone for falling a little short on a specific element, because the film was never meant to be dissected, it was meant to please.  It’s pleasing, it’s entertaining, it’s giant, it’s what we want, and it’s a great beginning to a new phase.  I look forward to the next two films, thinking that they could be even better, and will perhaps reach the goal of being an unbelievable blockbuster AND a phenomenal stand-alone film.