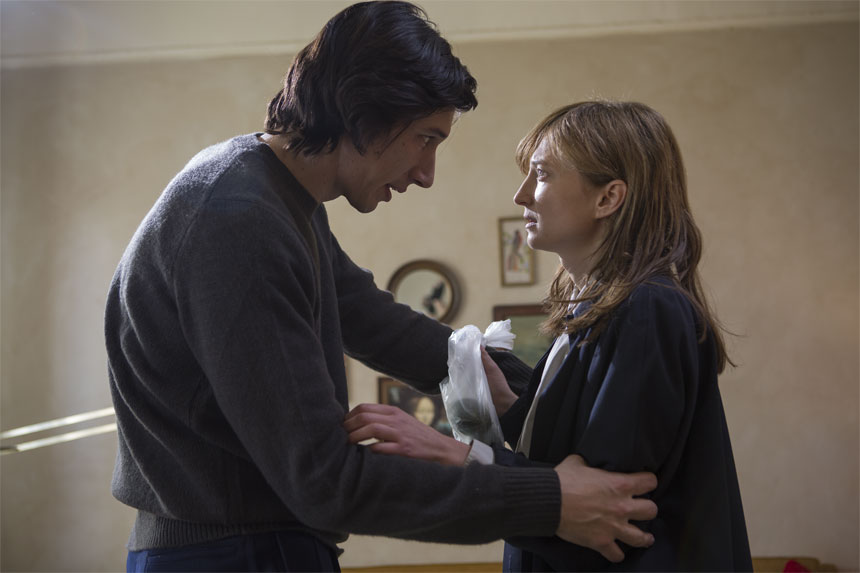 Adam Driver will turn 33 this year, and yet his filmography is tiny compared to many other actors, the San Diego native not getting his start in TV shows & short films until 2009.  His first feature roles wouldn’t come until 2012, with spots in Frances Ha and Lincoln.  But in 2013, he really made his mark.  Inside Llewyn Davis, Tracks, What If; all solid, respectable films, all helping to make his face & talent known to the American audience.  And now, well, the guy’s been in a Star Wars film, so there’s no more flying under the radar, and he’s soon to be in Terry Gilliam’s long-awaited, long-doomed Don Quixote movie, so that makes him even cooler.  Here in Hungry Hearts, we see his indie side, almost a theatrical side, and while the film itself isn’t anything to write home about, this budding star & talented actor is.

Jude meets Mina in an odd location; the bathroom of a Chinese restaurant.  Actually, they get stuck in there together, and that is the beginning of a happy romance & a bright future.  Jude is a New Yorker, Mina is Italian, and although they are very different, they are also very much in love.  Eventually, Mina becomes pregnant, the couple get married, they dote on their new son, and the path forward seems set.  But Mina is becoming increasingly paranoid & fearful of the outside world.  She begins by demanding holistic medicine, but warps that into a fear of germs, bacteria, meat, the bottoms of shoes; anything that might threaten her child.  As she begins to become increasingly protective, Jude starts to worry about the health of his son, a rapidly deteriorating state that becomes more dangerous every day.

That opening scene in the bathroom is the best part of the movie, a really funny, awkward, honest look at a couple just beginning.  And the rest of the movie, for that matter, is also very honest, doesn’t hold back, produces a frightening & believable atmosphere that I can respect.  But while Adam Driver is strong and Alba Rohrwacher is fine, the movie doesn’t really head anywhere after the initial groundwork is laid other than toward the typical, uncomfortable thriller.  The movie starts as a play, morphs into a drama, but ends as a thriller, and I didn’t enjoy the odd mood swings or general lack of clarity.  The plot is one that’s difficult to watch anyway, and sadly never rewards audiences for the effort we put in.  I wanted to like this movie, but the heavy content & the strange delivery kept me from buying in.  I hope to see more from Adam Driver as the years go on, but this film can probably be forgotten.