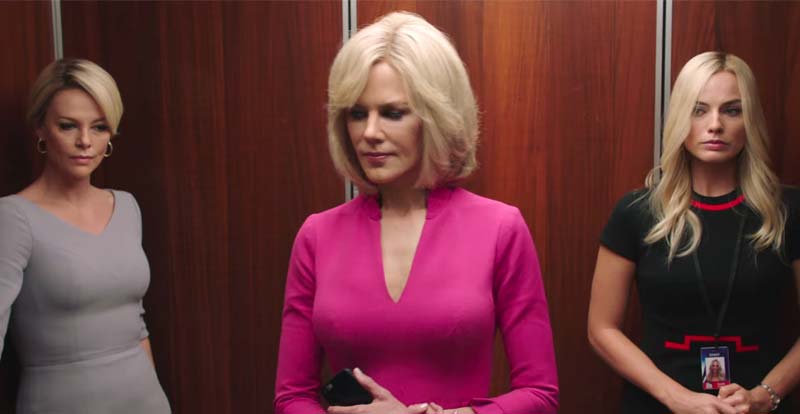 Bombshell is mostly a bomb, which is too easy to quip, and was far too easy to predict.  When I saw the trailer, I knew I didn’t want to watch this movie, or hear about Roger Ailes ever again.  The man is an evil monster, but so is anyone who voluntarily works at Fox News, so I want him punished for whatever he did wrong, but I don’t care to hear the woes of any Republican who, by vote, support, or voice, helped bring America to the place it is today.  Fuck them, fuck that they chose to work for filth and then didn’t like when filth started acting filthy.  I’ve got no sympathy in me for these people, Republicans won’t want to see the underbelly of their propaganda machine, and so that leaves absolutely no audience, which is exactly why this film has failed so hard.

Megyn Kelly, star anchor at Fox News, will have to choose whether to take a stand against Trump, Ailes, and the conservative mechanism, or simply ride it to the end of her own success story, ignoring the bodies that are crushed along the way.  Gretchen Carlson, another anchor at the network, one who used to be a hot item but whose stock has now cooled, has just been fired, and subsequently has accused bigwig Roger Ailes of sexual harassment.  Kelly was harassed as well, young up-and-comer Kayla Pospisil is going through it currently, but it’s hard to tell if/when to come forward; your career is on the line, but so is the safety of other women.  We all know the true story, we know how it ends, but we can watch it unfold here if we so choose, though the bitter battle might be more than we want to see.

That’s true for me; I didn’t want to see this.  I have no room in my heart for support or empathy for these women; they are very bad people.  Democrats are always trying to take the high road and expecting Republicans to join them, but that’s never what happens, they aren’t going to do that, they aren’t playing by the same moral rules we are.  It does no good to show an evil man like this and expect a bond somewhere in the middle of the aisle to fight abuse; that’s not how things work anymore.  That’s also why no one is watching and/or enjoying this film; Rs don’t want to be shown this shit, and Ds don’t have the energy left to fight for more causes, because Trump and his harem of twisted creatures are constantly forcing us to battle in a hundred directions at once, which is a brilliant strategy, and one that we often, stupidly or accidentally, invigorate ourselves.  This movie could be an example of that; we shouldn’t be wasting our time feeling sorry for Megyn Kelly of all people, why the hell would we do that?  So, politically, Bombshell is a disaster from the beginning, but it’s also a mess thematically as well; Roach is not a strong director, there are a hundred different, unnecessary cameos, the action comes off as dumb since we just watched the real life story unfold, and even the star three, who do a good job, can’t really do enough to make us justify watching what is basically one large bad decision.  No one is seeing this movie anyway, and I can’t think of any reason to recommend it; just let it die.