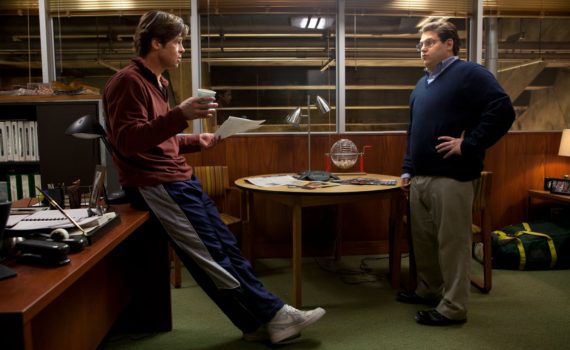 Moneyball might be the poor man’s Social Network, but what it lacks in original dramatics it makes up for in star power, tipping the scales toward streamline entertainment, rather than specific, cerebral, mood-driven intensity.  That might sound like too much study for a sports movie, but this isn’t Bull Durham we’re talking about here, this is next level, and it should be respected as such, if not to the same degree as other Sorkin successes.  Still, do you like Brad, baseball, and intense power dynamics?  Then here you go, this film has a ton to offer, even if you care nothing for the Oakland A’s; you don’t have to like Notre Dame to root for Rudy, and it doesn’t have to be Scorsese to be super cinema.

The Oakland Athletics were outspent four to one by the Yankees, they just lost their three best players, they were headed in the wrong direction, and General Manager Billy Beane was asked to do the impossible; build a championship team with no more money, no more talent, and no chance at all.  What he did next was simple; revolutionize the game.  Together with wunderkind Peter Brand, Beane set out on a mission to find players who were undervalued, who were on-base machines, who no one wanted but who had something left to give.  Using metrics and statistics rather than a feel for the moment and star power, the Athletics became great, greater than they ever had the right to be; this is their story.

Aaron Sorkin wrote A Few Good Men, Malice, The American President, Sports Night, The West Wing, Charlie Wilson’s War, The Social Network, Moneyball, Steve Jobs, and Molly’s Game; he knows his way around fast-paced narratives and captivating true stories.  He has a knack for bringing events to life in a way that we haven’t seen before, making even mundane details feel like they carry the weight of the world; he’s a film director’s dream.  Bennett Miller might not be the greatest talent (he’s only done two other films, Capote and Foxcatcher), but handed this script he seemed to know what to do, and that was let the words speak for themselves and the actors do their jobs.  Speaking of, this cast is incredible: Pitt, Hill, Hoffman, Chris Pratt, Robin Wright, and a slew of celebrities in archival footage or in portrayal.  And all that is not even taking into consideration the sports element, the true story arc, the awesome change that Beane was able to work upon the game.  There are some true wow moments in this movie, some awesome insight, and it’s laid out so intelligently, it’s hard to find many flaws.  Digging for some, I might point to a few times the drama felt over-done, or perhaps not high enough for how the event was delivered on screen, but those are quibbles; I think most audiences will sink into this film and revel in the intensity, not find reason to hold off on giving in.  Moneyball is a special movie, with great performances and inherent coolness, and it hasn’t lost its potency because it hasn’t lost its relevance.