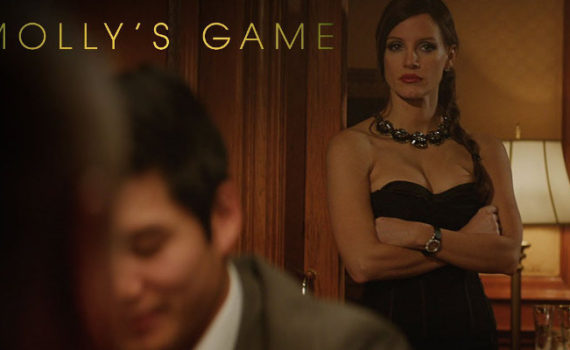 Aaron Sorkin tries his hand at directing, but this is far from his first experience creating fascinating cinema.  He might be the most widely known writer in Hollywood, producing hits for TV and for theatres since the 90s, focusing on politics and true stories with a talent that refuses to be ignored.  A Few Good Men, Malice, The American President, Sports Night, The West Wing, Charlie Wilson’s War, The Social Network, Moneyball, The Newsroom, Steve Jobs; a pretty impressive resume.  He directs Molly’s Game with the same level of skill as he wrote the screenplay, borrowing a little from those that have succeeded before, but not more than the allowable amount for a first-timer, and someone we’ll be seeing much more from in the coming years.

This is the true story of Molly Bloom, the Princess of Poker, who started an empire from scratch and watched it all come crumbling down.  Molly was an Olympic skier, a pressured athlete and probable genius, who could literally succeed at anything she tried her hand at.  When injuries caused her skiing career to come to a crashing halt, she decided that she didn’t want to immediately start law school, so she moved to L.A. to sow some wild oats.  This would lead Molly to the underground world of high-stakes poker tournaments, where she would soon start her own company hosting these events, catering to celebrities and athletes as they gambled away their millions.  But the government would soon turn its watchful eye on Molly and her clients, breaking up the party in epic fashion.

Molly’s Game is very similar to The Big Short, in its style, in its story, and in its speed.  It’s a true tale of money and power, and how fragile that fortress can be, while also focusing on the individuals who get caught up in the collapse.  If you like this format, if you like Sorkin’s way of weaving an intelligent thriller, then this movie is definitely for you.  I wasn’t sure it would be for me, as I’m not a fan of Jessica Chastain, but she delivers her strongest performance to date in this film, completely capturing Molly and her world.  Elba is great as well, Cera is the sneaky imp as usual, and all the side actors bring their A-game.  The only flaw, and it was a huge one, was the addition of Kevin Costner, especially in one key scene near the end, a section that felt stupid, thrown together, and allowed to completely suck.  Sorkin can be forgiven for a few missteps and for borrowing a little from other, successful films, as he’s new to viewing the project from behind the camera.  But Molly’s Game is definitely a smart start, a solid flick, and a nice addition to the best 2017 has to offer.