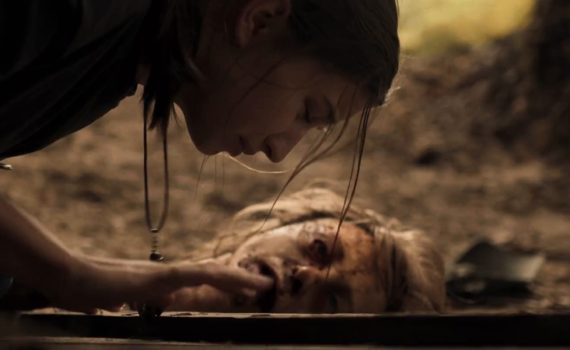 Well, what else do we have to do other than watch random Polish slasher movies that are new to Netflix; it’s not like we’ve got much else going on.  And slashers can be fun, especially when based on the classic, American, campy traditions of the 70s and 80s; I don’t know if Poland has there own history there, but I assume this director was running with that old chestnut.  Nobody Sleeps in the Woods Tonight sure feels like the killer-at-camp movies we’ve experienced before, which isn’t bad, but it might not be as easy to simply copy it as it seems.  In fact, apparently it’s rather hard, because this film sure didn’t get it right; at least it gave me something to do.

A group of teens is sent to wilderness camp because they are addicted to their devices, and their punishment is no technology in the woods, only nature and animals and all that crap.  It’s supposed to be therapeutic, but they don’t seem concerned with growth, only in hiding their phones and having sex with each other.  But they’ll soon have other concerns, when deformed homicidal maniacs strike camp, and start butchering all the peeps.  Seems there’s a story behind the chaos, and a reason these monsters were born, but all that matters right now to our plucky youngins is surviving the day, which will not be as easy as pressing a button.

It’s not that this movie is terrible, it’s that it offers us absolutely nothing.  It’s the same story, the same format, the same result, which isn’t awful of itself, because we like the genre, this team simple adds nothing to the conversation, makes no original marks, and that’s just too bad.  Call it a homage if you want and leave it at that, fine, but dig any deeper and you’ll start getting bored with the interesting details that you do not encounter, because they simply are absent.  A young girl who will be our hero, the slutty one who will die, the gay guy, the virgin, the counselors, the killers; it’s all standard, but boring as all get out, and not at all worth your time.