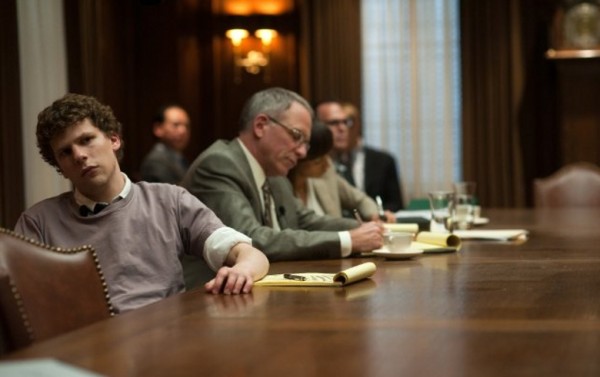 The combination of director David Fincher (Alien 3, Seven, The Game, Fight Club, Panic Room, Zodiac, Benjamin Button, Gone Girl), writer Aaron Sorkin (A Few Good Men, Malice, The American President, Sports Night, West Wing, Charlie Wilson’s War, Moneyball, Steve Jobs, Molly’s Game), and star Jesse Eisenberg (The Squid and the Whale, Adventure Land, Zombieland, To Rome with Love, Now You See Me, The Double, The End of the Tour, Dawn of Justice, Cafe Society, The Art of Self-Defense) is something to see by itself, regardless of content (and the content here happens to be spectacular).  Just looking at those filmographies is overwhelming, to see what great works these artists have produced, Social Network being just another to add to their lists, and perhaps to the very top.  It’s a stunning all-around achievement, a wickedly entertaining true story, and only gets more relevant with the passing of time.  And to think that I didn’t really get the hype the first time I saw it; count me corrected.

Being the little man on campus wasn’t sitting well with Harvard student Mark Zuckerberg, so he decided to do something about it.  He wasn’t getting into the best clubs, his family didn’t have the most money, his girlfriend had just dumped him; why not take his anger out on the system (and on women) by creating a website that allowed you to compare co-eds and rate them based on looks?  It might be rude, sexist even, a little sleazy, but Mark had the brains to create whatever he wanted, and the bile to force the issue.  His website would crash Harvard’s network and get the attention of the wealthy Winklevoss twins, who wanted Zuck to help them craft an exclusive social site for Harvard students that would allow them to create profiles, post updates, share pictures, connect on a whole new level.  With this idea in tow, and completely ignoring that he stole it from someone else, Mark Zuckerberg and his best friend Eduardo Saverin created Facebook, and the rest, as they say, is history.

David Fincher hasn’t made a good movie in 10 years, Aaron Sorkin either really, and I’ll never be able to shake watching Jesse Eisenberg’s first ever movie, a real made-for-TV conversation piece called Lighting: Fire from the Sky, but, holy cow, Social Network is phenomenal.  It is the perfect combination of talented people and fascinating content, spilled into our laps regardless of ick factor, like, here you go, you asked for reality, and here it is, though you might not like what you see.  The true story of an empire created by a robot gone mad wasn’t ever going to be very palatable, but wow is it watchable, to see a possible sociopath carve through boundaries and remake the world because he also happens to be a legitimate genius.  Eiesenberg plays Zuckerberg to perfection, Garfield is an astounding railroaded friend, and Armie Hammer as The Winklevi completely steals the show; I’m 6’5, 220, and there are two of me.  The rest of the cast is a name drop that actually works: Rooney Mara, Justin Timberlake, Rashida Jones, Max Minghella, and Dakota Johnson with a butt shot that might have jump started her career (ignoring the famous parents).  The film is smart, quick, dark, disturbing, oddly funny, boasts great music, and flows perfectly; it’s a masterclass in storytelling and detail-oriented filmmaking.  Some say this is the best of the decade, but I don’t even think it’s Fincher’s strongest; still, it’s hard to argue having just watched it and having just been blown away.