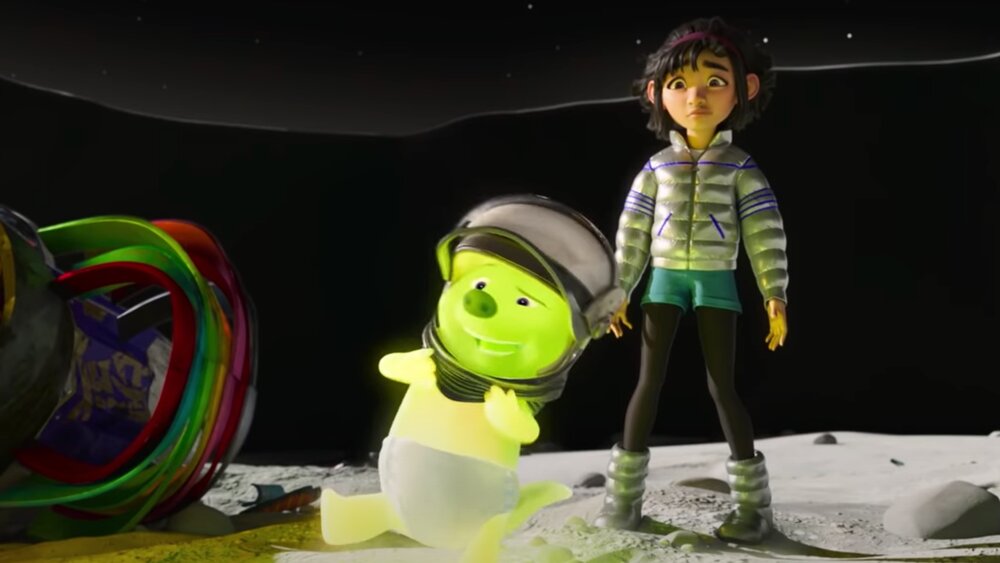 Over the Moon is what happens when you combine Moana, Abominable, Trolls 2, Lego Movie 2, and some random, chaotic, over-the-top pop culture; the result is not pretty.  Pearl Studios’ first and only film is Abominable, so it’s not a coincidence, they simple took a similar story and hired some Disney guys to make it all work, and that type of “borrowing” doesn’t go unnoticed.  It’s a ripoff in so many ways that it becomes distracting, and it seems like the original content is only there to mess things up further.  Made worse by a hundred different styles tried all at the same time, Over the Moon becomes a bumpy ride that even younger audiences will notice doesn’t terminate somewhere great.

Fei Fei loves her family and the traditions they have always kept, honoring the Moon Goddess in stories and making Moon Cakes in their shop.  But when her mother gets sick, Fei Fei will be challenged to move on, to accept new truths, to deal with loss in a way she wasn’t ready for, and that will prove to be very, very difficult.  Instead of accepting things, she sets out on an impossible quest; to reach the moon in a homemade rocket ship and to bring back proof of the Moon Goddess’ existence.  Well, as far-fetched as it sounds, Fei Fei reaches the Moon and meets the Goddess, but things aren’t what they seem, and her mission will bring her closer to her own self-awareness.

It’s just too derivative, which makes it hard to appreciate.  Moana morals, Abominable characters, Trolls 2 chaos, Lego Movie 2 pop, with still more sprinkled in for good measure: Frozen, Bolt, Next Gen.  It’s a mess, and a mess of the leftovers of other films, which makes it even worse.  There’s nothing original here at all except the music, which is absolutely terrible.  At first, I was pleasantly surprised; it seemed like the film would be a stage musical set in a China, with deep meanings and awesome characters.  Then they went to the Moon, everything became neon, the songs sucked, and the world turned upside down (Hamilton reference, hello Phillipa Soo).  The animation was terrific, that I can point to, and the beginning was great, that I can appreciate.  But the rest not even my kids could enjoy; it was a blunder of bad ideas and stolen content, not even worthy, I’m sad to say, of lesser-Netflix.