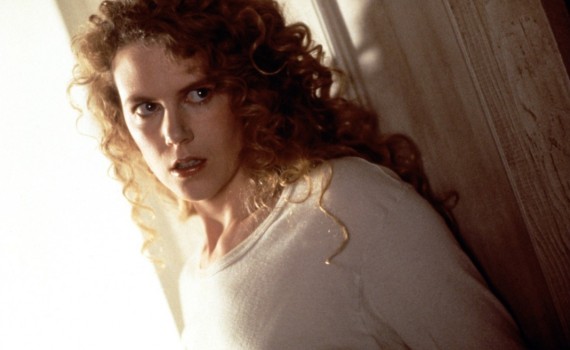 Long before the Keith Urban days, and even before the Tom Cruise era, Nicole Kidman was America’s sweetheart.  Or, perhaps more accurately, America’s Australian sexpot.  She was the leading lady that every studio wanted, a hot commodity that could both sizzle the screen and act the pants off her male counterparts.  Literally.  Anyway, it all started in 1989 with Dead Calm, a thrill ride where she played opposite Sam Neill & Billy Zane, two actors who were a little more respected at the time than perhaps they are now.  Then came Days of Thunder, the film where she would meet Cruise.  Far and Away would come soon after their wedding, and then Malice and To Die For, films that would mark the end of her becoming an established actress, the beginning of her high-powered career.  It’s always fun to go back in time and see stars before they were superstars, and Malice is a good place to do that, both because of its cast and based on the fact that, surprisingly, it’s a tremendous movie. Andy is an administrator at a local Massachusetts college, where he lives with his young wife Tracy.  The couple have just bought an old Victorian, are attempting to fix it up themselves with very little money, and really couldn’t be happier.  That is, except for Tracy’s odd stomach pain and a serial killer targeting beautiful college coeds.  But that aside, life’s good.  As Andy tries to fix up the house and keep his wife happy, Tracy worries about money and the future.  But a dark cloud hangs over the town as this psycho killer keeps striking, keeping Andy afraid for the safety of his wife & of his students, and dragging him into the limelight as a suspect after a series of unfortunate events.  The crook will be caught eventually, or so the villagers assume, but until then the community lives in fear and can’t trust their neighbors the way they should be able to in this once-peaceful New England town.

And all peripheral drama aside, Andy & Tracy are about to have their world flipped upside down by the arrival of the local hospital’s new high-profile doctor.  His name is Jed Hill, he’s a hotshot from Harvard, and he’s the best physician perhaps in the entire country.  He routinely saves the unsavable, knows just how good he is, and won’t let anyone forget it.  Also, he just so happens to have gone to high school with Andy and is need of a room to rent, having just arrived in town.  Hey, lucky day, Andy & Tracy have a big old house with an extra floor, he can stay there.  But it’s not all as pleasant as it seems.  Jed is as loose with booze & women as a frat boy, Tracy’s pains are getting worse, and Andy is no closer to catching the serial killer.  And it will all come to a head at the same time when Tracy is rushed to the hospital for an emergency procedure, where Jed must make a life-changing decision, and every event that follows shouts lie. Malice is one part radio melodrama, one part 90s thriller, creating a movie that’s as theatrical & twisted as any soap opera, but entertaining in a way that those could never be.  The small town, the killer, the happy couple, the hunky doctor, the mystery ailment, the emergency, the following debacle, the truths that begin to surface; it’s all one wild ride, something straight out of a steamy novel or an over-the-top stage show.  There’s even a dramatic scene in the rain set in a cliff-side house, like an old English murder mystery on the moors.  And this all might sound a bit ridiculous, but let me tell you, it’s amazing.  Of course it’s all a little much, it’s very melodramatic, but always in a great way, in a way that is pure entertainment without a shred of pretension.  I was pretty surprised by what I was watching; I was expecting someone much more sinister & sad.  But what I got was a Hand That Rocks the Cradle style film with more drama, more excitement, and a bit more talent, everything you could ask for from an early 90s film.

It’s fun to see Nicole Kidman this way, and not only because she’s beautiful.  In her younger days, she was perfectly crafted to fit these roles, and later couldn’t keep up with what America wanted from her.  She actually hides her accent in this film, doing it very well, and playing her part ultra-convincingly.  Alec Baldwin, who I will always love, was also excellent in his role, the cocky doctor who may be hiding a few things.  This was back in his glory days too, back around The Shadow, The Juror, The Edge.  And even Bill Pullman managed to be solid, even though he’ll never win awards as the most believable actor.  The trio worked together well, delivered surprise after surprise, and came away with what is an extremely enjoyable movie to watch.  Add in a few cool cameos (George C. Scott, Anne Bancroft, Peter Gallagher, Gwyneth Paltrow) and you’ve got a film that captures a time period, delivers one hell of a messed up story, may not get every detail perfect, but always feels morbidly fun; a movie worth revisiting. Video – With an aspect ratio of 1.85:1, 1920x1080p, the video quality is perhaps the best you’ll ever see from this film.  It was shot using Panavision cameras and lenses, and was developed in Technicolor in Hollywood, California.  The transfer from its original format to a widescreen Blu-ray disc was fairly flawless, with the clarity of a 90s film, of course, but with a precision of detail that speaks to the effort put in to make the transition as smooth as possible.

Audio – The disc was done in Dolby SR, with an option for English subtitles.  There are no other sound or language options in the menu.  Again, this is a 90s film remastered, so temper your quality expectations a little, but the sound quality was actually very nice, with a good score and a great balance of music & dialogue that is so often missing from today’s Blu-ray discs.

Extras – The only bonus features available are two trailers: Malice & The Onion Field. Highly Recommended.  If you missed this movie 20-odd years ago, you might want to go back and give it a shot.  It’s theatre at its most dramatic, thrills at their most thrilling, and stars at perhaps their peak.  You won’t be disappointed in the amount of twists, backstabs, cover stories, weird characters, and soap opera reveals, nor will you be bored as you watch this plot unfold.  You’ll see a film from a different time that translates well to today, and a movie that’s pure entertainment from start to finish.  The video transfers well to the Blu-ray disc, the sound is pretty excellent, but there aren’t many extras to be had.  Rewatch it if you loved it, check it out if it passed you by, don’t expect the story details to hold together under a ton of scrutiny, but enjoy a movie that’s all about the ride and will keep you guessing all the way to the over-dramatic finish.