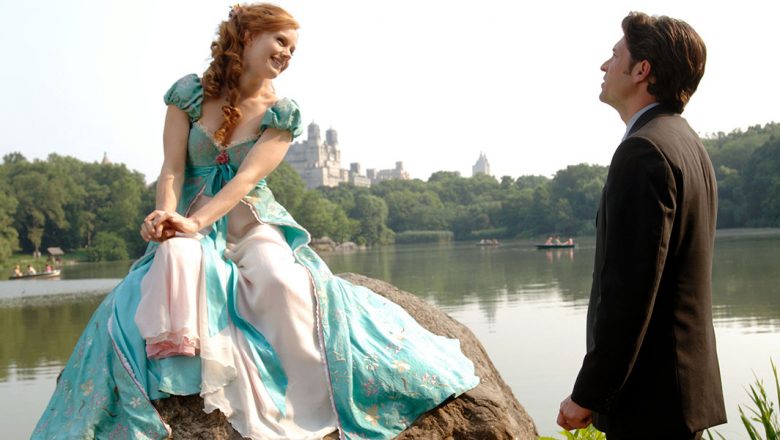 I know it didn’t all start for Amy Adams with Enchanted (she had done a lot of smaller roles and smaller films in the early 2000s, really putting in the hard work), but this movie sure feels like her coming out party, her debutante ball, and she’s been the most amazing Hollywood presence ever since, so thank god Disney decided to poke fun of itself in 2007.  Just look at this woman’s filmography (being kind at the beginning) and allow your jaw to fall: Drop Dead Gorgeous, Psycho Beach Party, Cruel Intentions 2, Serving Sara, Catch Me If You Can, Junebug, Talladega Nights, Enchanted, Charlie Wilson’s War, Sunshine Cleaning, Miss Pettigrew, Doubt, Night at the Museum, Julia & Julia, Leap Year, The Fighter, The Muppets, On the Road, The Master, Trouble with the Curve, Man of Steel et al., Her, American Hustle, Big Eyes, Arrival, Nocturnal Animals, Vice.  That’s one hell of a list, and she’s one hell of a talent, on display perfectly in a movie that really needed her to be special since not much else about it was; thankfully she delivered.

Prince Edward stands to inherit the throne of the kingdom of Andalasia once he weds, his stepmother holding the authority until that time.  Secretly, she wishes to keep control herself and is constantly scheming, with the help of the Prince’s “friend” Nathaniel, to keep Edward from meeting the lovely maiden of his dreams.  But fate steps in and delivers him to the doorstep of Giselle, a beautiful young lady just waiting for her true love’s kiss, and they become betrothed.  Queen Narissa, the stepmother, transforms herself into an ugly hag and pushes Giselle into a portal to remove her from the scene before the wedding, which magically takes her to New York City and unfortunately makes her live action.  Now Giselle must survive the city, find Edward, share their first kiss, and let all her dreams come true, before Narissa puts a wrench in the works again.  But what if love doesn’t work that way, what if the first person to catch you when you fall is just someone who was passing by, not the answer to your every heart’s desire?

No one can do a tribute to and a mockery of the classic animated Disney princess fairy tale like Disney can, and we have Enchanted to prove it.  Every moment is crafted to poke a little at the formula we’ve been enjoying for decades; the princess, the prince, love at first time, the evil queen, a poisoned apple, a romance that’s too good to be true.  What’s the saying, if it’s too good to be true it probably isn’t true?  That’s what we learn, that happily ever after isn’t perfectly easy, and sometimes the person you match up the best with isn’t the person you meet first.  Even the songs take old Disney and make it funny, especially when Giselle cleans the house Snow White style but with rats, flies, and pigeons.  The music is pretty great: True Love’s Kiss, Happy Working Song, That’s How You Know.  And the acting is nice too, for what it’s worth: Adams, Dempsey, Marsden, Timothy Spall, Susan Sarandon, Idina Menzel, Rachel Covey as the little girl.  Amy takes the spotlight though, of course, she’s the brightest beacon of talent here, and it’s fun to watch her, even when what’s going on around her is rather silly.  The plot is weak, obviously, it was a little more “kiddish” than I remember, and it wraps up wonkily, but watch for a good time and watch with family, because Enchanted is entertainment if nothing else.