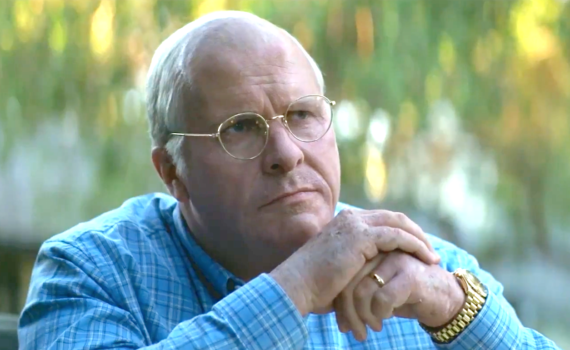 Adam McKay blew us all away with his wacky take on the economic crisis in The Big Short, showing us that comedies can merge with dramas if only filmmakers and audiences can let go of their preconceived notions and jump on board with reckless abandon.  I was a huge fan of that movie, I thought it worked on every level, and I appreciated that McKay was willing to take risks while crafting an expose, not simply relying on what had been done before to bring the truth to light.  He tries the same style here in Vice, the same mockery of the status quo and another release of the bonds that hold other films down.  The result isn’t exactly as pure and/or unexpected, we can see the trick coming a mile away, and we don’t accept it as eagerly this time around, for whatever reason.  Perhaps that’s our fault, but Vice fails slightly, missing its lofty goal and landing somewhere in the middle where it will historically go unnoticed.

Dick Cheney’s rise to power before and during the Bush administration will go down as one of the craftiest and most cunning moves in American history, mostly because of the amount of power he was able to harness without almost anyone noticing.  Cheney was middling at most things, drank too much, had heart trouble, relied heavily on his wife to keep him pointed in the right direction, and didn’t seem destined for greatness.  But what he had going for him was a complete lack of empathy and a drive to reach the top that rivaled that of any dictator.  Getting in on the ground floor with Donald Rumsfeld and becoming Vice President under George W. Bush, Cheney would amass more control inside the White House than the forefathers could ever have dreamed of, creating an American political system aimed at nothing less than complete domination.

What worked in The Big Short didn’t work as well in Vice, and that led to slight disappointment, especially considering our high collective expectation going in.  We saw the trailer, we felt the vibe, we witnessed Bale’s transformation, and we got excited, but our assurance was partially misled.  McKay makes magic again, but this time we can see the magician manipulating the wires, we can see the back of the box, and so we leave not with a feeling of awe but of ahh ok.  Bale’s Cheney is uncanny and frightening, there’s no doubt about that; what that actor is willing to do to himself is unseemly but remarkable.  Adams was fine, Carell was a bit over-the-top, but the real show-stopper was Sam Rockwell as Bush; he was perfection.  I hated the narration, I didn’t like the fake outs, Alison Pill was terrible as Mary Cheney, and I thought the film was edited very poorly.  But I did like the look into this man’s psyche, the glance at a history that we recently lived, and the attempt at an original way of filmmaking; I just don’t think it all came together for McKay this time around.