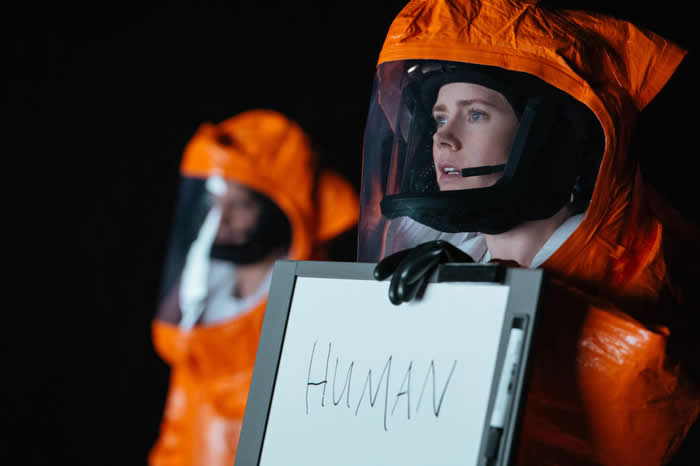 Arrival is the perfect marriage of writer, director, and lead actor, putting so many other films who have attempted the same to shame.  For a bit of background, Ted Chiang wrote the short story that this movie is based on, Story of Your Life, as part of a collection called Story of Your Life and Others, published in 2002.  His book is part sci-fi, part philosophy, presenting a world in which a scientific premise is fact rather than fiction, and then launching the plot from that point.  He has a lot to say, a ton of depth to his stories, although at times they can become a bit laden with terms and can begin to lose their entertainment appeal.  Enter Villeneuve and Adams, a team that seems tailor-made to bring Chiang’s ideas to audiences everywhere, make them more accessible, but still allow them to live as the brilliant pieces they are.

When they arrived, the world changed.  Twelve vessels landing in twelve apparently random parts of the globe, with no obvious intent other than to communicate.  But first contact isn’t easy when both the species and the language are so alien.  Every day the ships would open up to humans to allow them to enter and speak, but establishing a mutual dialogue would become the biggest challenge Earth had ever faced.  Dr. Louise Banks, an expert linguist, was called upon by the US government to find a away to ask the important questions: where do you come from and why are you here.  Teaming up with theoretical physicist Ian Donnelly, Louise would work every waking moment for months trying to communicate in a way the aliens could understand, never knowing that what they had to say and how they viewed humanity would destroy any perception of happiness she ever knew.

If you haven’t read the Chiang collective, I highly recommend that you do so.  It is a series of sci-fi short stories that are unlike anything you have experienced before.  While King scares and the Big Three invent, Chiang fabricates the very nature of our world, convincing us that it’s real, and then slams us with a moral that we never even knew existed.  It’s a great book, if a little wordy at times, and makes for some great conversation.  I love that one of its stories was made into a film, and the concept behind both is definitely something worth experiencing.  Time, love, the future, choices, diverging paths, uncontrollably fates; what more do you need to keep you up at night contemplating the very meaning of existence?  If you’re the type of person who wants to wonder what it’s all about, wants to question whether or not you’d still live your life if you already knew the ending, then have at this particular story with confidence.

Back to the movie, and it did Chiang justice in every way.  Dennis Villeneuve was the perfect director to take on this project.  His dark, dramatic style was perfect for this plot, and he was able to squeeze every ounce of humanity from the science and serve us up the juicy pulp.  Prisoners, Enemy, Sicario, and Blade Runner upcoming; no other modern director is doing the things Villeneuve seems to have mastered with ease.  The man is a cinematographic genius, setting the mood like none other, stamping his brand on everything he touches.  And Amy Adams was also the hands-down untouchable choice for the role of Louise, someone who is at the very top of her game.  If I had to make a prediction, I’d say that Adams probably gets more Oscar buzz surrounding Nocturnal Animals than she does Arrival, and that the film itself fails to win big if only because of its inherent sci-fi nature.  To be fair, it isn’t quite as good as Interstellar, isn’t quite as shockingly beautiful as Sicario, but is easily one of 2016’s very best so far, in a year that just hasn’t been phenomenal.  Yet.