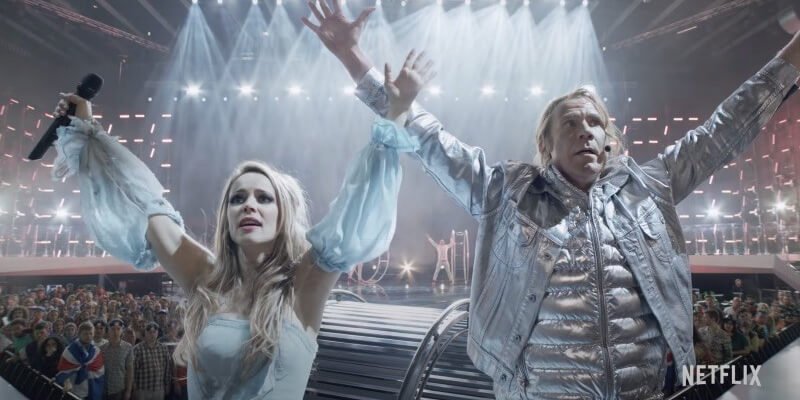 If you, like me, enjoyed American Idol and Will Ferrell in their respective hay days, than you are bound to love Eurovision, a festival of the ridiculous that highlights the best insanity has to offer.  It’s part singing competition glory and part Zoolander spoof-romp, which sounds like a weird combination, but works because reality shows are entertaining and that kind of comedy is entertainingly stupid.  With new films going directly to streaming services, the amount of content available is limited, so jump on this Netflix original right away and have a good time; what else do you have to do?

Ever since he was a small boy, Icelander Lars Erickssong has wanted to make music.  His dream was to win the European singing competition called Eurovision, and that vision had no room for anything else.  He sings with his childhood friend Sigrit, who loves Lars very much, though he says he can’t think of such things until he makes his dreams come true.  And they just might; a freak accident propels Lars & Sigrit, who call themselves Fire Saga, into the Eurovision singing contest to represent Iceland.  Now they just have to win, which will not be easy, since they are the least talented group there, Lars is a moron, and fate seems set on Fire Saga burning out before the world really gets a chance to see them shine.

The beginning is a little slow, and I think the film could probably have cut off about 45 minutes that they didn’t need, because 2 solid hours of Will Ferrell doing an accent can become a little much, but if you allow yourself to become invested in Eurovision it has rewards galore; you just have to be a little more patient then this genre should probably be permitted to ask for.  The first half hour was a kinda boring, I don’t know what was going on there, so if you turned it off I don’t blame you; the movie’s job is to hook you, it’s not your job to persevere.  BUT it gets better, I swear, or maybe it gets so much worse that it becomes equally that much more fun.  At the contest is where the magic happens, because that’s where McAdams takes over and where we meet Stevens, who both quickly become the reasons to watch.  They are phenomenal, their songs are so entertaining (although Rachel didn’t sing hers), and they really steal the show, making Will something of a straight man in the process, as hard as that is to believe.  The rest of the cast was whatever: Michael Persbrandt from The Salvation was great, Pierce Brosnan was amusing, Demi Lovato was stupid, Graham Norton was …there.  The real reasons to watch are McAdams & Stevens, who are both simply brilliant, and by the end, if you’ve made it that far, you’ll be rewarded with more, honest, heart-warming sentiment than you’d expect, and a surprisingly lovely time in general.