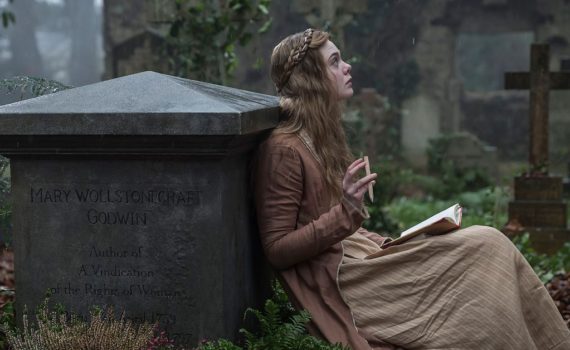 It took a little while, but Elle Fanning might finally be coming into her own.  And even that isn’t fair; the girl is only just now 20 years old, it’s not like she’s a veteran who has been in a hundred films, it just feels that way because she’s Dakota’s sister and she’s been in the business basically her entire life.  It isn’t her fault that we expected her to be an instantaneous superstar, like her sister was, that’s too much pressure for anyone, let alone a little kid.  But, in a twist of the tale, Elle has outpaced Dakota, and has become the leading lady that her sister failed to develop into.  After roles in The Neon Demon, 20th Century Women, and The Beguiled, audiences have begun to take her seriously, as they should, because she proves in Mary Shelley that she’s a talented actress who is here to stay.

Mary Godwin lived in London with her half-siblings, her stepmother, and her father, who was a well-known philosopher and author in his day, as was Mary’s late mother, a woman of wild ideas and passionate fancies.  Mary has much of her mother inside her; the desire to write, to live an extraordinary life, to buck the trends, to show the world that a woman’s place doesn’t have to be in the home, silent, behind a man, desperately surviving when everyone else is boldly living.  When Mary met a young but promising poet named Percy Shelley, she knew that he had the ability to sweep her off her feet, to take her away from her father’s house to a life less ordinary.  But the more beastly aspects of a Bohemian lifestyle didn’t occur to Mary, nor could she outrun them, and the evil power of men was always only one step behind.  Mary would go on to write a “ghost story” after a challenge from a group of authors, a game to pass the time, and in it she would pour all of her anger, her fear, and her talent, unburdening herself from the harsh realities of a world gone mad with greed and lust and loneliness.

Fanning has perhaps never been better than she is as Mary Shelley, a part that seems written for her, a piece of history plucked out of the past and sculpted into a movie with her in mind.  She was equal parts strong and young, daring and shackled by societal norms, every day practices that left no room for a woman to grow or learn or experience.  Mary had to become an outcast in order to live beyond her father’s walls, and Elle found a way to play that part without making it seem like a grab for pity.  The story is a bit slow in parts, focuses mostly on Mary’s relationship and troubles, less on the book that made her famous.  But it’s a biography, not an origin story, we’re meeting Mary Shelley, not Frankenstein, so the setup of the film can be understood.  Fanning is definitely better than the movie, with tends toward the dark, somber, and slow.  But there is no reason to be scared away; while she is great, the rest is good, and the entire feature is worth your time, with Fanning’s performance acting as a bonus for your patience.