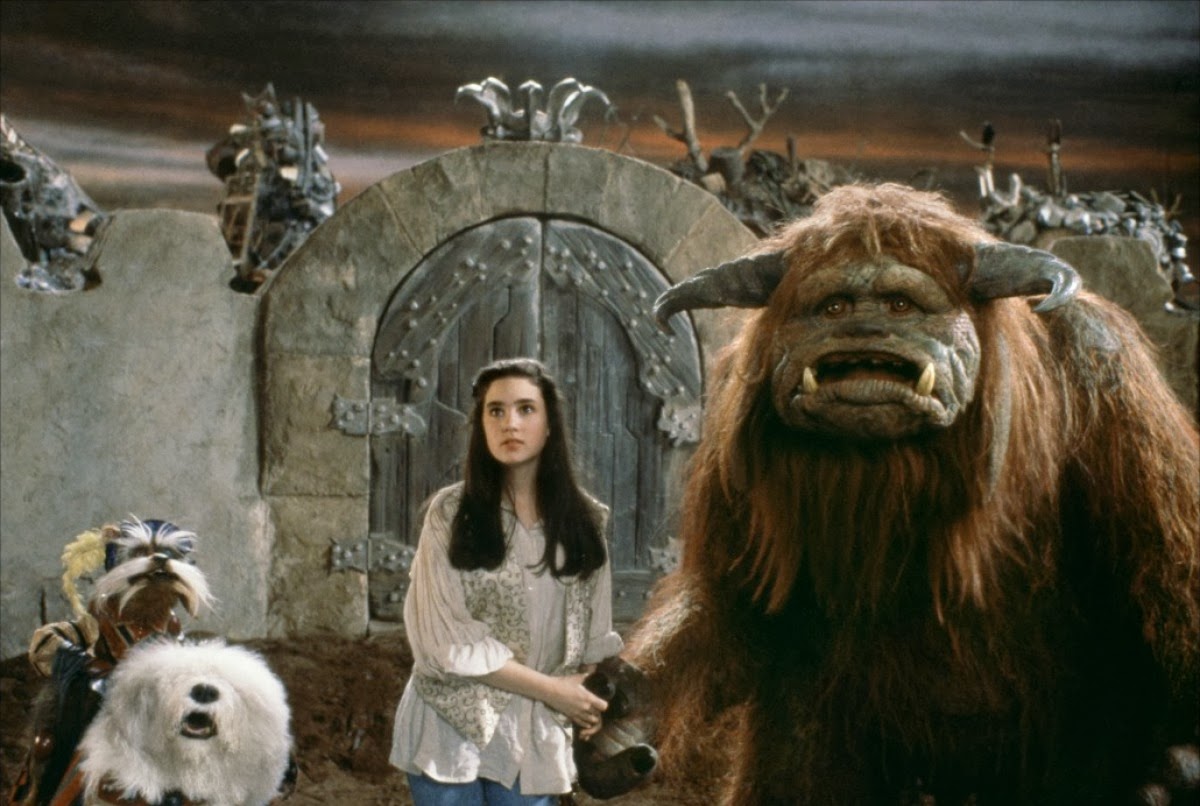 It’s good to see Jim Henson use his genius for darker purposes.  His Muppets are great, legendary, magical, but Dark Crystal was a way to direct his art at older audiences, and Labyrinth was a combination of young whimsy he has already perfected with a more mature darkness that his puppets could also explore.  And, setting that aside, the movie is simple 80s goodness, a piece of childhood that will always be in our hearts, that we will pass down to our kids whether they want it or not.  I’m lucky, my children love weird films, from Ghibli to Rankin, from The Neverending Story to The Last Unicorn.  So I was as happy to share Labyrinth with them as they were to watch it, a bizarre bit of cinema history that still holds up over thirty years later.

Sarah hates her new life, with a stepmother and a new baby half brother, wishing more than anything that things could go back to the way they were before.  To escape her current situation, Sarah spends most of her time in a fantasy world of her own imagination, clinging to childhood fancies and stuffed animals, refusing to grow up.  One evening, when she is asked to babysit her crying brother once again, Sarah wishes out loud that he would be taken far away by the goblins, to the Goblin King, in a goblin city.  Little does she know that they are listening to her, and when her words are spoken they cannot be taken back.  The boy is abducted, and Sarah, realizing what she has does wrong, vows to bring him home.  She will have 13 hours to solve the mystery of the Labyrinth in order to reach the center of the city, or her brother will be turned into a goblin himself, and she will never be able to return.

Fun fact; Brian Henson, the voice of Hoggle and the son of Jim Henson, is married to Mia Sara, an 80s icon if ever there was one.  Legend, which was her very first film, is one of my favorites, not to mention Ferris Bueller, which is my third favorite movie of all time and Sara’s second ever project.  But I digress.  Labyrinth is gold, I don’t think that’s up for debate, but I think you could argue that it shouldn’t be, and it wouldn’t take much effort.  The story is ridiculous.  David Bowie, though an actor as well, seems like he’d never been in front of a camera before.  His songs are nonsensical.  I could go on, but what’s the point, I love this movie anyway.  The puppets, the goblins, the bizarre puzzles, Jennifer Connelly in one of her first roles; it’s an 80s extravaganza and it’s here to stay.