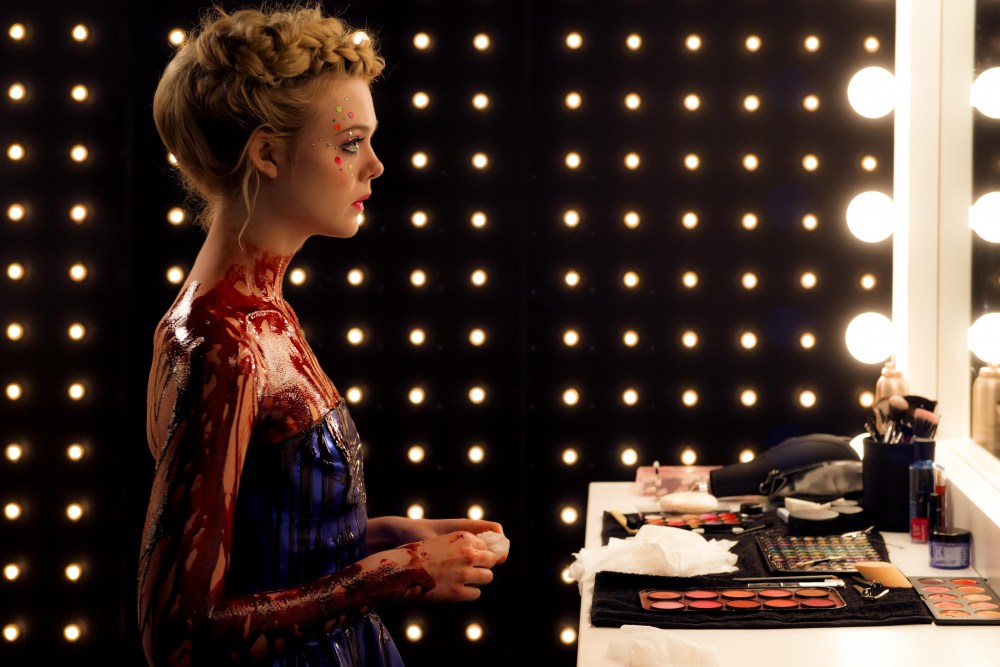 Films set in L.A. and depicting the various forms of glamorous life there are certainly en vogue right now, as Hollywood pumps out the features featuring, well, itself.  From Cafe Society to La La Land, no time period is off limits, no style too daring, movies about California are selling right now, so get on board or be left behind.  Well, eventually audiences and critics are going to tire of the same set, we’ll all move on, and it’ll be European epics that take center stage, or something else equally random.  But before the trend dwindles, Neon Demon is here to make sure that horror gets its turn.  And in typical horror fashion, its turn will definitely demand our attention.  This is one movie you can’t ignore, and perhaps the only right way to put a lid on the current style.

When Jesse moved to L.A. to pursue a modelling career, she never imagined that her stardom would flare to life so quickly, so violently, or be snuffed out so suddenly.  After a friend takes a few photos, Jesse interviews with an agency, where she is immediately put under contract.  Everyone in the industry who meets her can instantly see a quality that only 1 in every 1000 girls who come through town possess.  But this gift is cursed, as every working girl grows to hate the beauty that Jesse has inherent.  Her only friend in the game is Ruby, a makeup artist who seems somehow above the noise, and who appreciates Jesse’s unique look without wanting to own it.  Shoots will come, fame will grow ever closer, but so will danger, as the bright lights of Hollywood shine down.

For my money, Neon Demon is almost as good as La La Land.  And I say that having enjoyed the latter, though I wouldn’t join the throng of others calling it the best film of the year.  But I did like it, I just think Neon Demon is basically as strong, but by taking a completely different path.  It’s a horror film done in a way that only NWR can pull off, using color and house music and violence in a combination that isn’t always pleasant, but definitely can’t be pushed aside.  This is a very strange movie, let’s just put that out there, and will never have the same appeal as a big-budget, star-studded film, but it has its own strengths.  The cast is pretty great, in small doses: Keanu Reeves, Karl Glusman, Christina Hendricks.  The music is great, ultra-catchy.  The blood boils right under the surface, begging to be released.  And the film turns horror toward the end in a wonderful way, so be prepared.  This is basically an alternative version of the classic L.A. story we’ve seen a hundred times before, and for that deserves our praise.