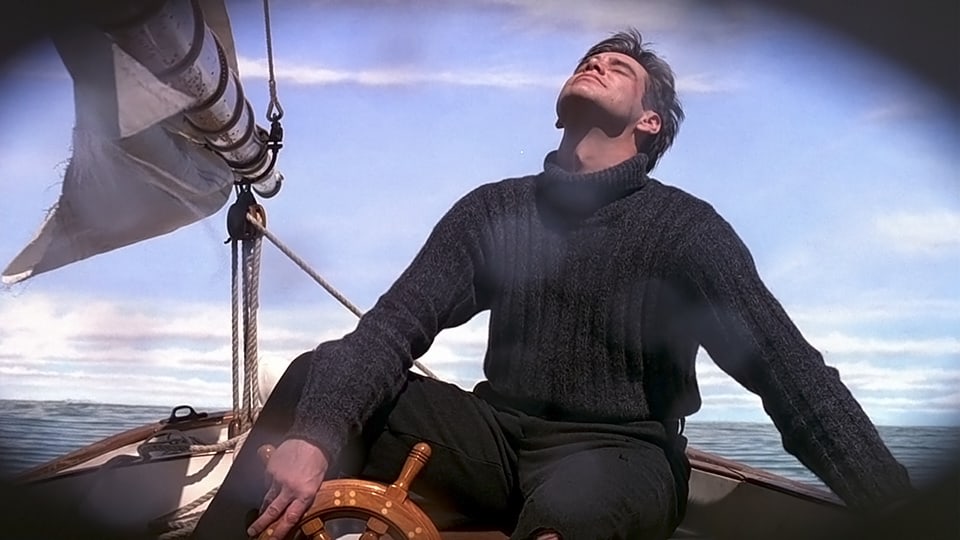 Peter Weir might not be a name that you instantly recognize, but I guarantee you’ve seen some of his movies.  In fact, he’s been nominated four times for Best Director, has never won, his time growing thin; he’ll be 74 this summer.  This Australian filmmaker’s filmography speaks for itself, with a 25-year span of quality cinema that should infect any director with a hint of jealousy.  Witness, The Mosquito Coast, Dead Poet’s Society, The Truman Show, Master and Commander, The Way Back; DPS and TTS are five-star films in my book, and M&C gave me one of the best experiences I can remember having in a theatre, so thank you Mr. Weir.  This film is one of his strongest, an honest look at fear and boundaries and manipulation and the quest for happiness that takes us to odd places in order to get the message across, but that never lets go of our hand or our heart.

Truman was born within a television show, it’s just that no one has ever told him.  Every day of his life, from his very residence in the womb, has been caught on camera and broadcast live to the entire world.  What started as a one-camera operation has blossomed into the greatest show on Earth, complete with an entire town covered by a dome, a structure that can be seen from outer space.  Now that Truman has grown, thousands of camera are rolling, capturing his life from every angle, at every moment, and still he has no idea.  Every person he has ever met has been an actor, someone paid to be his friend, or even his wife.  It’s a charade on a colossal scale, but one that can’t go on forever, with Truman beginning to suspect that something is not right, that the world around him seems too intent on his not exploring past the boundaries of his island, that he as at the center of something important, even if he doesn’t know exactly what.

I almost flippantly called Truman Burbank Jim Carrey’s career performance, but when I paused to consider, I realized that the comedian has had several roles that go far beyond comedy and show exactly how excellent an actor he is below the goofball surface.  Liar Liar, Man on the Moon, Eternal Sunshine; there was a span there as the 90s became the 2000s that Carrey became something special.  But still, perhaps no more so than in The Truman Show, a film that gave him the chance to shine as a lovable, lonely figure who swiftly won our love.  This film is a heart breaker, while also containing a ton of hope and a deep-rooted message that won’t be quickly forgotten.  It’s a unique idea, well executed by Weir, the master of transporting audiences and making them forget we’re watching a movie.  Carrey is phenomenal, Linney is perfect, Emmerich was given a gift of a part, and the group outside the studio include some really big names: Ed Harris, Paul Giamatti, Philip Baker Hall, Harry Shearer.  There’s nothing not to easily love about this film, it’s inserted into our lives so well, feeling so much like the truth we’ve been looking for rather than just another story masquerading as real life.