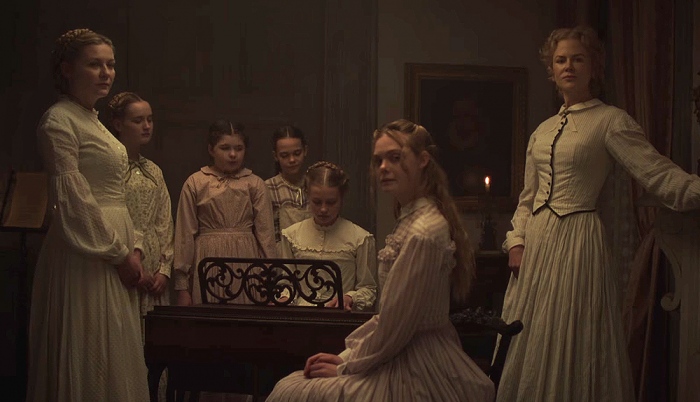 Had The Beguiled failed to change my opinion, I was ready to call Sofia Coppola exactly how I saw her; as bad a director as she is an actress.  Her films have always failed to capture me, to pull me to the side of the critics who rave about her work.  The Virgin Suicides, Lost in Translation, A Very Murray Christmas; she has others, but these are the ones that stand out as much less engaging and strong than most would claim.  Also, I don’t understand her obsession with Kirsten Dunst, an actress who is nowhere near the top level, who does have a certain look/vibe/quality, but nothing that moves me to watch.  So I was prepared to completely call Coppola down had her newest movie not struck the right chord; not that my opinion would ruin her holidays, but this film was my personal last straw.  Turns out I need not have worried; The Beguiled is above average in every way. The Civil War, and no American is free from its repercussions.  Especially those living on the front, the boundary between North and South that is constantly changing hands, constantly a place of battle and of fear.  At Farnsworth’s Seminary for Young Ladies, Miss Martha keeps the school running even while war rages on, because for these girls home is worse; Atlanta, Charleston, any of the Southern cities that the Yankees have brought under attack.  So life goes on at the school in much the same way it always has; lessons, music, manners, French.  But the slaves have gone, most of the girls have left, and the sound of cannon fire fills the otherwise empty silence of morning, a constant reminder that change is swirling all around.

When one of the younger girls, Amy, searches the woods for mushrooms to eat and wild animals to care for, she stumbles upon a wounded soldier, a Northerner, a Blue Belly, an enemy of the household.  But out of Christian goodness she introduces herself and helps him to the Seminary, where Miss Martha welcomes him in, not cordially, but with an air of duty to a save a man’s life, no matter which side he’s on.  The teacher at the school, Edwina, is immediately intrigued by this man, someone who has been all over the world, a journeyman who has seen adventure.  And the eldest girl, Alicia, is interested too, for far simpler and natural reasons.  This unwanted guest soon becomes a member of the family, but his allegiances, and his manhood, will eventually cause serious problems. I bite my tongue; The Beguiled is solid, and Sofia Coppola did a tremendous job.  Now, just to be fair, it was a book first, and then it was a 1971 Clint Eastwood/Don Siegel movie, and then she wrote this screenplay based on that screenplay based on that novel.  So you can see that there was a ton of base for her to work with, but that’s not to her discredit, you do what you can with what you’ve got and you don’t make excuses or apologies.  Coppola crafted a great version of this story, a very simple and beautiful and spooky version that should be applauded for what it didn’t do as much as for what it did.  The film refused to lose control; it stayed tightly wound, it was short, it was basic, and yet I found that to be very refreshing.  We didn’t need a ton of metaphor and complications, the plot was strong on its own, and Coppola left it largely alone, adding her style of course, but letting the movie speak for itself.

Perhaps the reason she could allow that is because the actors were all so committed, so perfectly cast in their roles and prepared to stay in their lanes.  No one stole the show, no one shoved another aside for the limelight, everyone came to do their job, and it was a job well done.  Kidman was great as Miss Martha, a little stoic, a little cold, but with waters running deep.  Dunst delivered one of the better performances I’ve seen from her, sexy and smart and subtle.  Farrell is extremely underrated, especially flourishing when he’s actually allowed to be Irish.  And the rest of the cast was much more than filler: Elle Fanning, Oona Laurence, Angourie Rice, Addison Riecke.  They all teamed up to bring a fascinating story to life, Coppola brought an artistic style to the plot, and the result was an oddly enjoyable 90 minutes. Video – With an aspect ratio of 1.66:1 (1080p HD Widescreen), and shot using an Arricam LT camera with Zeiss Master Prime and Angenieux Optimo lenses and an Arricam ST camera with Zeiss Master Prime and Angenieux Optimo lenses, the video quality of the Blu-ray isn’t as exceptional as you might imagine.  Coppola, I think, intentionally left the images slightly grainy, left the color slightly dark, in an attempt to convey the time period rather than the power of modern media.  And it worked, the film felt very authentic, and there are great visuals throughout shot with an intelligent eye, just don’t expect perfect picture quality.

Audio – The Blu-ray disc was done in English 5.1 DTS HD Master Audio, with an option of Spanish 5.1 DTS Digital Surround, French 5.1 DTS Digital Surround, and English Descriptive Video Service.  Subtitles are available in English SDH, Spanish, and French.  Also, button sounds can be turned on or off from the sound menu.  The audio was very nice, with a great balance and an ear for period music, allowing it to naturally occur more often than not, setting the scene with a smart use of instruments and song.

Extras – There are a few special features on the disc, though not a ton.  A Shift in Perspective is a 7-minute behind-the-scenes look.  A Southern Style is a 5-minute featurette about keeping the film period correct while also incorporating artistic vision.  And there are six previews; Nocturnal Animals, Hyde Park on Hudson, Loving, Dallas Buyers Club, The Danish Girl, Suffragette. Highly Recommended.  Sofia Coppola has changed my opinion, and perhaps even caused me to take a look back at some of her films, on the chance that I missed what she intended and could possibly see it now.  Again, this film was a smart choice, not an entirely original project, but I don’t fault anyone for borrowing, as long as the result is something I can enjoy.  Coppola weaved a cool tale, Kidman, Dunst, and Farrell were all superb, and The Beguiled becomes one of the Top Ten or Twenty of the year.  It isn’t reinventing the wheel, as the expression goes, but it is solid film-making with capable acting; it would be greedy to ask for more.  The video served its purpose, the audio was nice, and there are a few extras, so the technical side won’t dazzle you, but it does its job.  I’d like to go back and watch the original; I’d be interested to see why Coppola cut out the nudity, if she was intending to do this story from a female rather than a male perspective, but the fact that I’m so curious is a sign of a film well done.