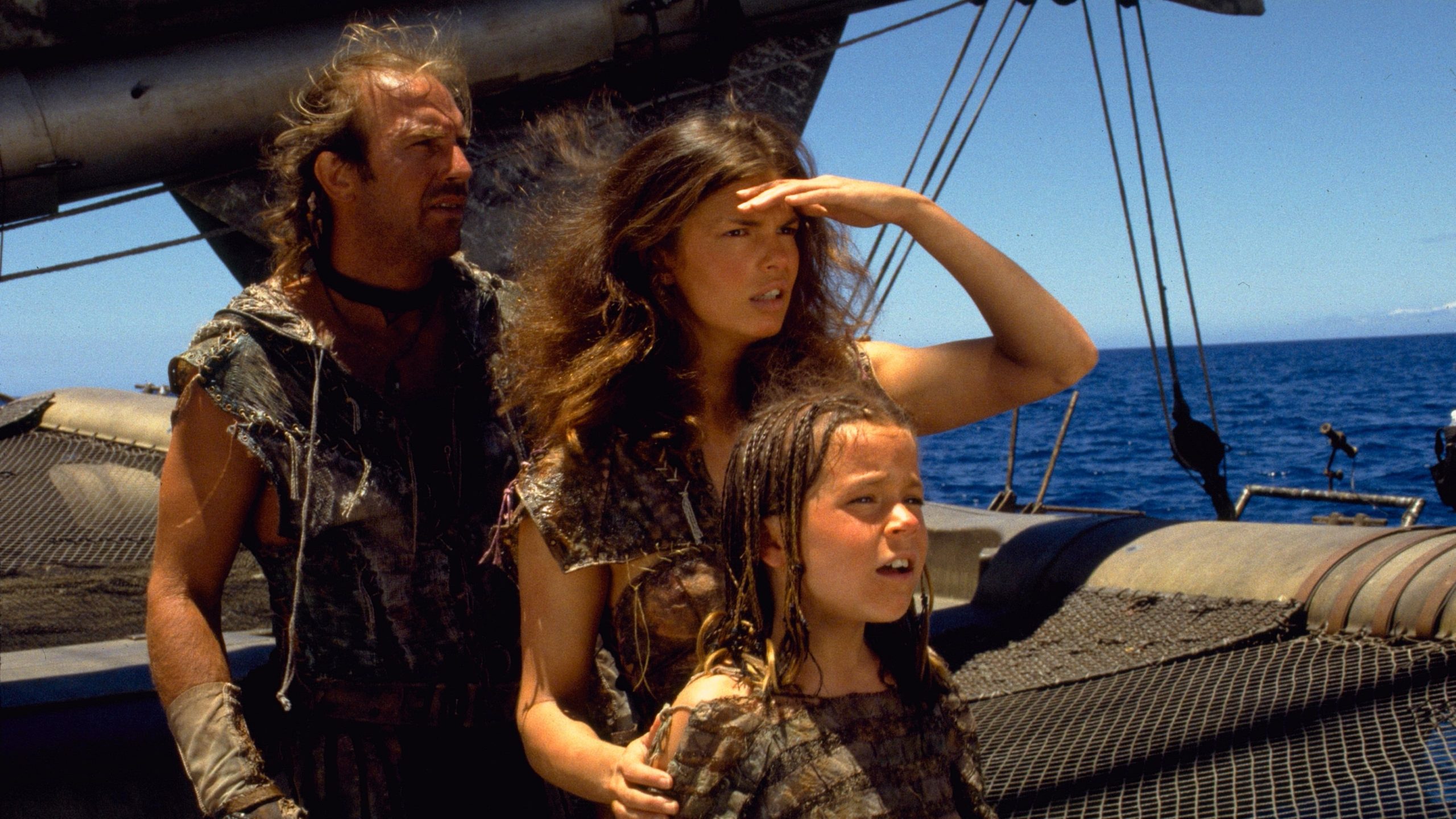 Kevin Costner is only Kevin Costner, and sometimes being Kevin Costner is enough.  Field of Dreams, Dances with Wolves, The Postman; that’s about it but it’s enough, he’s himself but that’s enough, and those movies work because there’s something about the guy that we like, even though we understand that he isn’t talented.  There might be a few more you could add, based on your preference, but mostly Costner is an actor who only accidentally works out occasionally, and that’s not the case with Waterworld.  It’s a batshit film on it’s own, obviously, but maybe someone could have saved it from itself; just not Kevin.

In the future, global warming will have melted the polar ice caps, covering the planet in water.  Those who survive will, generations later, not even remember that there were cities and continents; dry land will seem a legendary thing to them.  But a girl will come who has a map on her back, a map that tales say will lead to the last remaining land, and whoever finds her can live on solid ground once more.  In the middle of this struggle for the child enters a Mariner, a man who has adapted to the water in more ways than one, a loner who travels the seas just staying alive.  He didn’t ask to be a hero, but he will have to use his skills for the betterment of others, which may be the hardest lesson he’ll ever have to learn.

Very openly and admittedly, this is simply Mad Max Goes Boating, and that’s fine as far as that goes, at least they acknowledge that, but it doesn’t mean the idea is any less dumb, any less of a ripoff and a waste of time, just because you admit to being theme thieves.  We simply didn’t need a carbon copy of a film we already saw and liked better, especially if you can’t offer any extra talent to the pool.  In concept, sure, Waterworld is fun, and yeah it’s a silly good time, especially when Dennis Hopper is on the screen.  But when the plot is in Kevin Costner’s hands, he simply drops it, because he’s not good enough to make a dumb character awesome, or to make a dumb script palatable.  I can’t say I won’t always hold a special place in my heart for this movie, since it’s so lovably idiotic.  But that doesn’t mean I have to rate it highly; it’s one of the worst action movies you will ever see, it’s just held together just well enough to enjoy if you choose to enjoy it; it has no real power of its own.