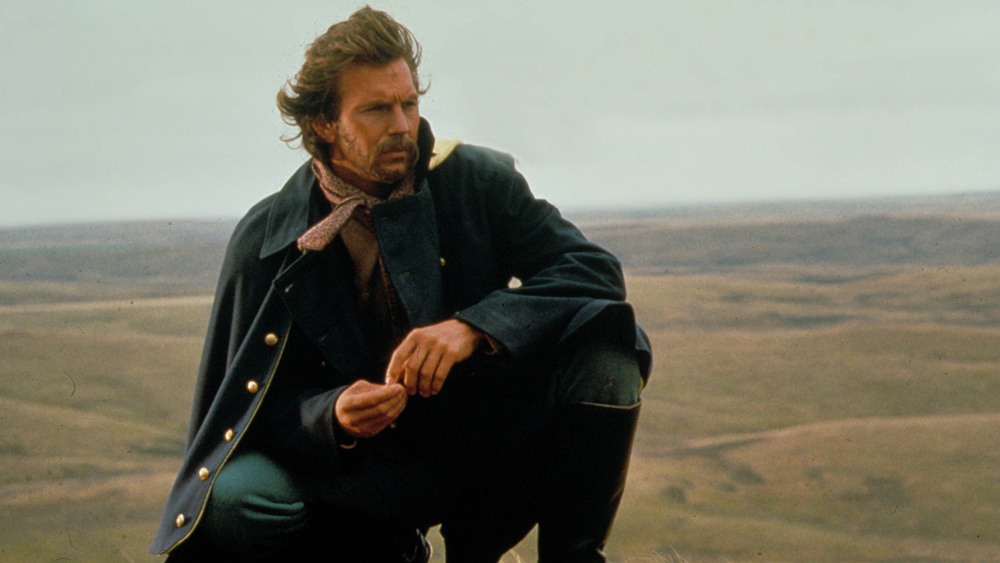 Kevin Costner has directed three films in his career; Dances with Wolves, The Postman, and Open Range.  I’ve never seen Open Range, but The Postman is one of my cult closet favorites, and Dances with Wolves was one hell of a directorial debut.  It was nominated for twelve Oscars, twelve!, winning seven and cementing Costner’s place as a Hollywood star.  Now, he’s not even a good actor, I think we can all agree on that, but there’s something about the guy, some reason that we want to watch him, and no amount of talent (or lack thereof) is going to stop us from loving him.

In the final days of the Civil War, Lieutenant John Dunbar is shot in the leg, and rather than have it amputated, he risks his life for one more ride past the enemy, not caring whether he lives or dies.  Well, he lives, and his act of heroism earns him a post at any fort in the nation.  He chooses one of the westernmost he can find, a station on the edge of the frontier, just so he can see a wild land before it is tamed by all the settlers traveling steadily toward the sinking sun.  In this harsh but beautiful land, Dunbar finds friends where he never thought he would find them, love where he least expected it, and a part of himself that he never imagined was there, all brought into the light by the native people of the plains and the magical serenity of the open prairie.

I don’t even know why this movie is good, it just is.  Not very professional, I know, but that’s the way it is with Costner some times, take Field of Dreams for example; it’s iconic and so enjoyable, even though its star really sucks.  Costner is a bad actor and a worse director, but he captures the spirit of the American West accidentally well here, allowing audiences to experience a taste of history and of what would become a cinema icon.  This history might not even be that accurate, how would I know, but it feels real, and it feels heartfelt, and it works on some level that can’t even be explained.  The music, the landscape, the characters, the happiness that Dunbar finds; it’ll get to you if you let it, it’ll melt your heart and shock you into clapping, even if you’re not sure why.