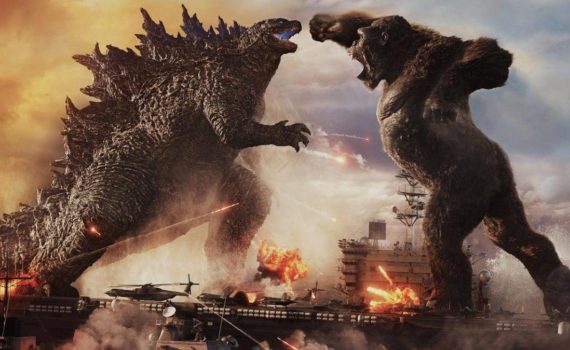 The Monsterverse has a quality curve that only slightly rises above flat with Godzilla, peaks extremely low with Skull Island and King of the Monsters, then flattens back out again with Godzilla vs. Kong.  This is a franchise that went wholly nowhere, and that’s how history should remember it.  That it looked awesome at times along the way is a fond memory, but not a reason to give these films the credit they do not deserve.  GvsK is a coughing end (if this is the end) to a sputtering series, a row of movies that, I guess, were merely meant to entertain, which they did, but can still be judged harshly for doing absolutely nothing else.

So here is where we stand; Godzilla helped save us from some monsters, a couple times, now is some sort of sleeping savior, and Kong is being held captive on his island because scientists know that if he and Godzilla ever met there would be an epic battle for supremacy over …us.  But something an evil corporation is doing is going to stir the pot; they’re building a technology that agitates Godzilla into attacking, and they need an extra piece that Kong is required to sniff out.  So both monsters are on the move, and it unleashes exactly the cataclysmic events we feared, leading to a confrontation that will decide the fate of lowly mankind.

Once again, all that was necessary was to show us some awesome monster fights, and you ruined it by having stupid people say stupid lines as stupidly as they could.  I know it’s a tough situation; if you had a film of pure explosive chaos critics would say “well I never connected to the characters, what was their motivation, blah blah blah blah blah”, but I’m hear to tell you that it’s OK to say nothing at all if what you have to say is dumb.  It’s like Ross with Cousin Cassie; you probably shouldn’t have said anything.  That’s really the only problem I had with GvsK, but it’s a big one; the humans sucked.  The acting was abysmal, the dialogue was idiotic, and having them scurry around like ants for 2 hours did nothing to help me enjoy the incredible spectacle that was happening meanwhile, which, I’m telling you, was the only reason any of us were watching in the first place.  Keep the human element to a minimum if it’s not going to help anyway, give us a vessel to experience the action through, but let that be the end of the unnecessary “heart” of the film.  Because, otherwise, and like the others, the fighting was badasss, the visuals were killer, I didn’t hate the time I spent watching, I just wish I didn’t have to listen as well.