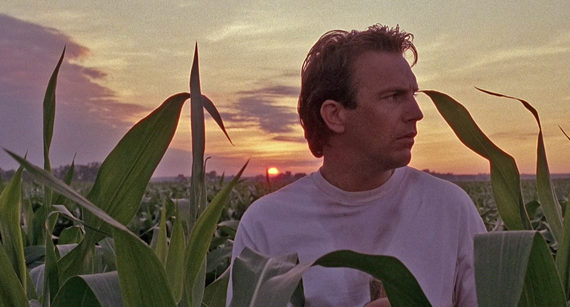 One of the greatest American movies of all time and an ode to one of our longest standing traditions, Field of Dreams is a classic film about a classic sport, but also a story about so much more.  Unlike Rudy or Hoosiers, which are equally wonderful, Field of Dreams focuses less on the passion of playing the sport and more on the mystical quality of the sport itself.  It brings to life the legends of the past and puts faces on the people who love the game enough to hold on to it forever.  It also breaks the heart with a message about the fleeting qualities of life, and how those we care for are gone too soon, before we can summon the courage to tell them how we really feel.  For all those reasons, this film is a pillar in the temple to cinema, and loses nothing rewatched many years and many times later, always summoning its magic from the inexhaustible pool of nostalgia, tradition, and family.

Ray Kinsella loves his wife, his daughter, baseball, and has just bought a farm; though the road to this point was winding, that about sums things up.  He’s in over his head as a farmer, but his wife loves living in Iowa, and they are a happy family: Ray, Annie, and little Karin.  One evening out in the corn, Ray hears a voice, and it tells him, “if you build it, he will come.”  Ray doesn’t know what this means, he fears that he’s going crazy, but he knows that the voice wants him to build a baseball diamond, right smack dab in the middle of his corn.  So the family dips into their savings, builds a ballpark, and waits, while the bills pile up.  But someone does come, and it’s someone Ray grew up hearing about from his father, who also loved baseball.  The man who appears from the corn to play ball on the field with his friends is “Shoeless” Joe Jackson, bringing with him the infamous Black Sox team of 1919.  Watching them play on his field is a dream come true for Ray, but his mission isn’t over, and the voice doesn’t stop.  What comes next is a journey of the spirit down a path that’s hard to walk, facing regrets that threaten to overwhelm you, but made a little easier by those who hold your hand along the way.

I well up during multiple scenes every time I watch this movie; it has that kind of power, the ability to hit you where you didn’t know you weren’t protected.  For me, it’s always been the message about father and son, but this time around it was also the fear of failing your family, of keeping your children safe, and growing up to be the kind of man you pictured you could be.  That was a surprise, those punches thrown from different directions, but I don’t blame the film for landing a few good ones; in fact, I welcome it.  Sometimes we need to let a little out before we burst, and Field of Dreams is just what the doctor ordered.  It’s deep, it’s beautiful, it’s touching, it’s heartbreaking, and above all it’s honest, even while it tells a fantastic story.  Magical realism, that’s the genre of the novel the film was based on, and it’s one of my favorites, an absolutely wonderful way to make a point about the human condition.  At the same time, this movie is about a amazing sport, one that we can trace back 150 years, something that’s an ingrained part of our country in a way that can’t be described.  This film tries though, and you can feel that truth within every marvelous moment.  Kevin Costner may not be the best actor, but he’s perfect here, never better, and his supporting cast helps him out the whole way through.  I can’t wait to watch this with my kids, to share this experience with them, because it’s made a marked difference in my life, and I will never forget either its hopeful message or its stunning voice.