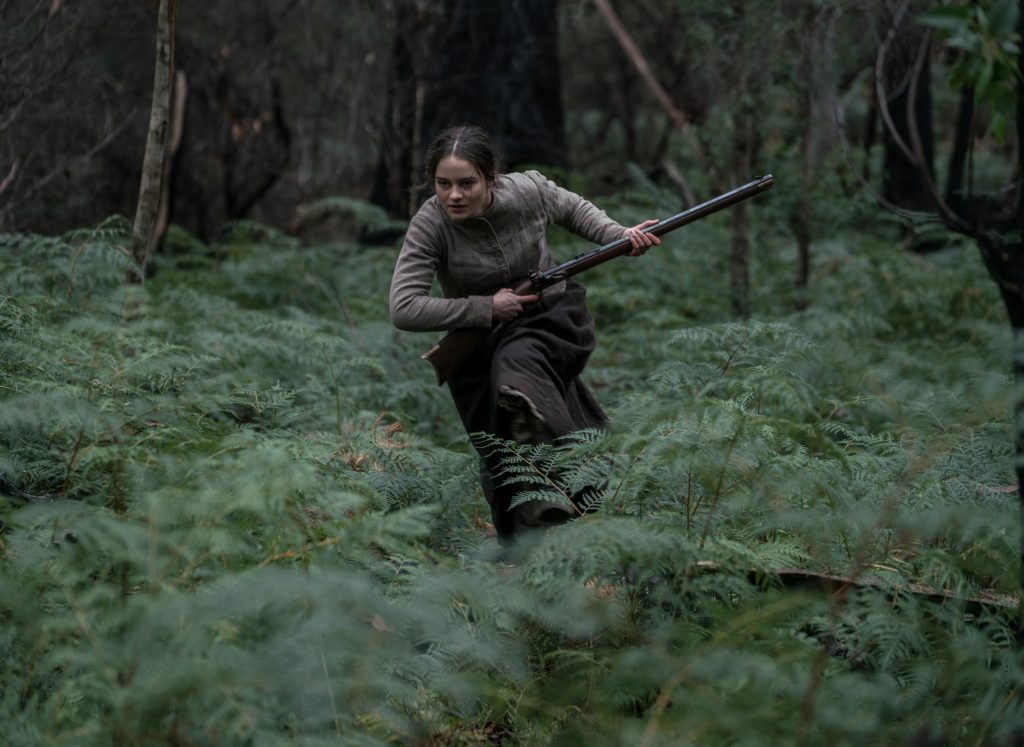 I hope to god that this becomes a genre; Irish convicts in Tasmania seeking revenge against evil British officers, with the aid of heroic Aborigines.  I would watch every single addition to that fledgling style, and if anyone knows some that already exist, I want to hear about them.  The amount that I was on board for this film from the very start as soon as I heard all their accents and saw the frontier that they lived on cannot be measured, and I think it’s safe to say I died a little inside when the fullness of my impossible dreams weren’t realized by the end.  In all seriousness, I loved the beginning of this film so much that I knew I would be let down eventually, my excitement was too high, and the director was much too amateur to take a phenomenal idea of this caliber to the finish line without running out of breath at least a little.  Even so, The Nightingale is one of the best of the year, flaws and all, and we can only hope that Kent keeps producing pictures, because they are bound to only get better.

The British Empire used Australia and its surrounding islands as penal colonies after claiming the Eastern half of the continent in the late 1700s, continuing colonial expansion when gold and other mining opportunities were discovered, completely disregarding the native people who had lived there for thousands of years.  In an English outpost in Tasmania, with Irish convicts working off their sentences and “black fellas” attacking from the surrounding forests, Lieutenant Hawkins chafes at being kept in the wilderness instead of being promoted to a higher position.  He and two of his men rape a local woman, kill her husband, and murder her baby, running away from the scene and leaving Clare for dead.  But they underestimated her rage; she hires a captured slave turned scout named Billy, who has never forgotten his own family’s deaths at the hands of the British, and follows the Lieutenant into the bush to enact her righteous vengeance.

I liked but didn’t love The Babadook, Kent’s first feature, mostly critiquing it for the same reason I will here as well; it started spectacularly but couldn’t keep up that pace.  Babadook devolved into just another scary movie, after introducing us to a plot that could have been so much more; the exact same thing happened in Nightingale, the start was too good to be true, and the rest just never lived up to the story’s potential.  Maybe Kent still needs some seasoning, but she’s definitely shown signs of intense talent, and I for one am willing to watch, be patient, and applaud when her day finally comes.  It’s not far off; this movie was still excellent, despite its excessive length and meandering middle.  The protagonists were wonderful, the villains were vomitous, the landscape was breathtaking, the Aboriginal plot was very important, and I was always invested, small critiques aside.  I do think the dream sequences were unnecessary, I do think we went a little Revenant too often, and perhaps that the film as a whole needed trimmed/edited a bit more, but, again, those are picky points, I generally think Nightingale was a success.  It’s brutal, it’s sickening, don’t watch without that warning, but it’s just as savage as it needed to be to tell a tale that you hope could never have been true but are sure happened far too often.  What might have been a Top 5 of the year with perfect execution perhaps ended up a Top 20 instead, but that’s hardly a huge knock or a reason to not to watch.