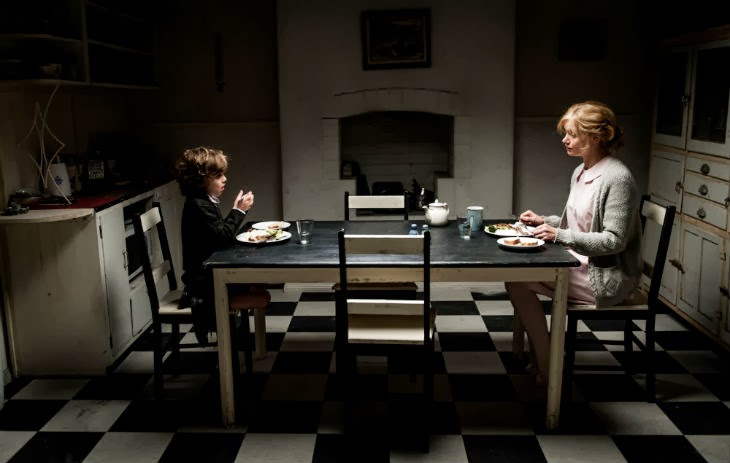 When I recently reviewed It Follows, I talked about two very different sub-genres of horror.  There are, of course, many more than two in total, but I focused on one I enjoy and one I do not.  The horror sub-genre I enjoy is over-the-top, often poor quality, always gory, with a creature, cabin, camp, or co-ed.  Basically b-horror, creature features, slashers, entertainment, you know.  And the sub-genre I don’t like is full of ghosts, possessions, hauntings, rhymes, boogie men.  I find it to be too in-your-face, too creepy, too reliant on startle reflex, and never as good a film as it tries to be.  At least with the first category no one is trying too hard; with the second, everyone is.  It Follows was successful because it fits into neither of these groups, delivering homage horror that terrifies audiences to the core with absolutely no gimmicks.  The Babadook starts off just as strong, but ultimately falls into the genre I never love, leaving me disappointed, while so many others will be absolutely overjoyed.

The set up could not be more darkly realistic.  Amelia is an Australian mother who works at a nursing home.  Her young son, Samuel, goes to school and is very intelligent, honest to a fault.  But this single-parent home is far from perfect.  Samuel was born on the day his father died, killed in a car accident while driving Amelia to the hospital.  This tragedy has resulted in many things: Amelia’s loneliness, Samuel’s morbid curiosity, his acting out violently at times, and his mother’s isolation from family and anyone who might learn to see past the oddities of this strange pair.  But things are about to get even worse.  After reading a frightening book that somehow appeared in Samuel’s bedroom, his behavior goes through the roof.  He becomes obsessed with protecting his mother from the Babadook, hurts other children, and can’t attend school.  Whatever it is that is haunting their house compels mother & son to alienate themselves from the outside world and stay inside, where danger seems to be lurking in the darkness.

I have to first give the film credit for a killer beginning.  The film paints the kid as a little monster, his mother as a saint, shows audiences this extremely difficult life, frightens us out of our wits with the mysterious book, and makes us wonder what the hell is going on.  If I would have rated the movie after the first thirty minutes, I would probably have given it a 5/5.  However (and here’s where I’ll assume my opinion differs from so many of you), the middle of the plot takes a complete 180 and turned me off from the completion of the story.  After starting so strong, so much of the action became just another ghost movie, which I’m predisposed to not enjoy.  Creepy voices, dark shadows, things moving on their own, heads shaking back & forth, children swept away by unseen forces; it’s a vibe that so many people enjoy but that I’ve never come to love.  I feel like the director ran out of originality and had to fall back on the recipe of the sub-genre, had to give in to the norm because the great introduction had run its course.  Apart from the beginning, the only part of the movie that stuck with me was the Babadook itself, what it could represent, and I’m still pondering the metaphors of an evil that perhaps we all have in the shadowy corners of our hearts.  So take this review as you will, understanding that this type of horror film is not my favorite.  If it happens to be yours, you’re in for a well-made, very frightening, and cleverly set up film that will probably launch itself near the top of your list.