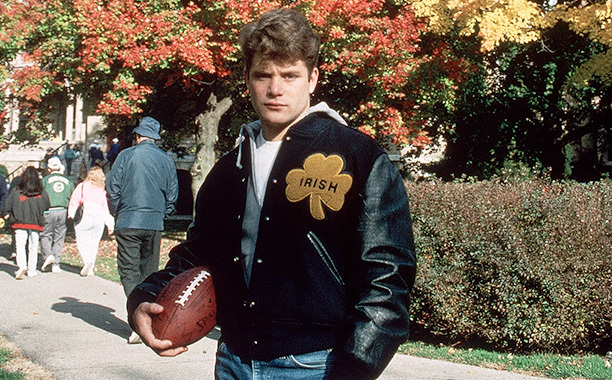 Perhaps the greatest sports movie of all time, Rudy ranks right up there with Hoosiers and Field of Dreams, defining Americana in a way that, really, no other films have ever been able to match.  In fact, Hoosiers has the same director and writer as Rudy, and you can tell; there’s a certain formula this team followed when producing such a heart-wrenching sports film, and I’m not mad about it.  Rudy is the inspirational story to top all other inspirational stories, and it’s true, which is even more fun.  You can watch it once, you can watch it a thousand times, the message will always come shining through, and when that music plays at the end you’ll well up; I dare you to try not to.

Daniel “Rudy” Ruettiger has loved one thing above all else his entire life, and that’s Notre Dame football.  Although he’s small, not overly-intelligent, and nonathletic, Rudy has always told everyone he meets that someday he’ll play ball for the Irish, that they should buy their tickets now, because it’s not a question of if but of when.  After being denied admission, witnessing a friend’s death, and leaving his schoolyard sweetheart behind, Rudy travels to South Bend to find a way into his favorite university and onto his favorite team, even if that means enrolling in a nearby junior college first, and putting in the grunt work of being a human tackling dummy for those players lucky enough to dress for the Fighting Irish.  But Rudy’s dream isn’t crushed, it’s only on hold, and his day will come, simply because he’s worked hard enough to earn it.

Rudy is the ultimate never-say-die movie, which is funny, because Astin is also the star of Goonies, who also never say die.  Grownup Sean plays Rudy well, the lovable character that we will all root for to the end, because we see ourselves in him and want our own dreams to come true, no matter how unlikely they may be.  And the rest of the cast is great: Favreau, Dutton, Ned Beatty, Lili Taylor, Vince Vaughn, Robert Prosky from Mrs. Doubtfire, Jason Miller from The Exorcist.  But it’s the music that really drives the passion, those iconic songs by Jerry Goldsmith, tunes you will never forget.  All combined, the pieces make a great cinema experience out of Rudy, a true marvel of emotion and perseverance and hard work, paying off at the end with magical moments that will go down in film history as some of the best we’ve ever seen.