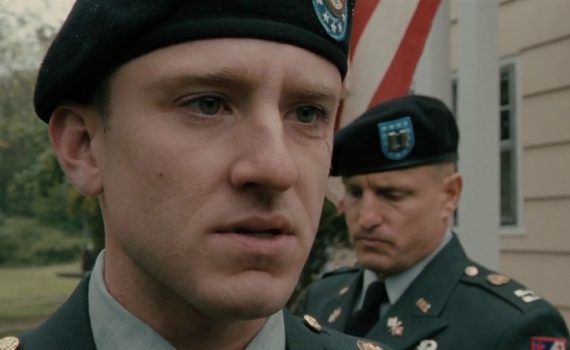 I missed my opportunity to have it revealed to me in The Messenger that Ben Foster is a tremendous actor, having already discovered that from other films by the time I got around to watching this post-war drama.  Pandorum, Ain’t Them Bodies Saints, Lone Survivor, Hell or High Water, Hostiles, Leave No Trace, Galveston; Foster is one of the lucky ones to emerge from child stardom, hold it together, and make it as a legitimate actor.  Not only that, he’s one of the best we’ve been seeing for the past 10 years, and there’s no sign that he’s slowing down.  I think, had I seen The Messenger when it came out, that I would have been blown away by his performance, because it’s unarguably great, he is so the man.  But I just watched it and I already knew he was amazing, so I guess I wasn’t impressed, which left me finding the movie as a whole only good, not great.

Will Montgomery has recently returned from a tour of duty with the U.S. Army, and his first assignment back home is to join the Casualty Notification Team; the guys who knock on your door when your loved one has been killed serving their country.  Will is dealing with his own problems of rage and displacement after seeing what he saw overseas, but now he has this job to try to wrap his brain around too, this daily grind of watching widows weep over dead husbands, fathers collapse after hearing that they’ll never see their daughters again.  Will works alongside Tony Stone, who has been hardened by this job, and by his own time in battle, pain callused over by rough wear.  The pair of servicemen might attempt to help each other through this grueling task, but they also may not be able to manage the despair that plagues them every day, the pressure of being messengers of death.

I generally don’t think that Oran Moverman is a good writer or director, but he did do the screenplay for Love & Mercy, one of the greatest movies of the last 5 years, so I can’t completely knock the guy; he’s just not exactly special.  Neither is The Messenger, a film that relies heavily on its lead actors, which is fine, but even heavier on our surprise that Ben Foster can carry the load, which was a problem for me, since I didn’t watch this movie until after I already knew we was a genius.  No one will ever accuse Woody Harrelson of being a genius; he’s done some respectable things, especially later in his career, but he’s essentially always the exact same character; it just fits sometimes.  The veteran story here is a troubling one, a very painful portrayal of life after service, and we can all get behind that, none of us want our soldiers to suffer in any way.  But that message is lost after a while, the story flounders, and while the acting is good, the script isn’t really.  And so The Messenger kind of flies by and fails to leave a lasting impression, while being solid enough not to require steering away from.