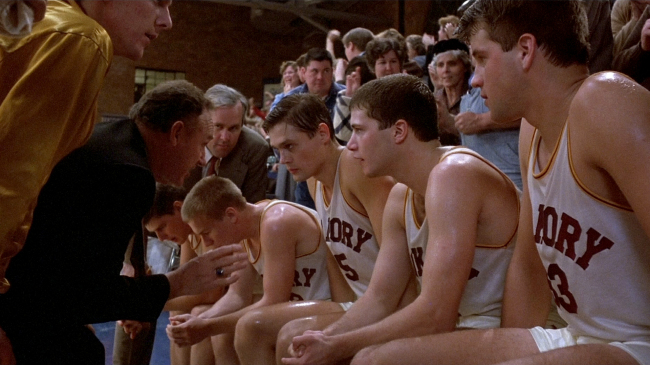 The team of director David Anspaugh and writer Angelo Pizzo brought us two of the greatest sports film ever made: Hoosiers in 1986 and Rudy in 1993.  That would be about it, they wouldn’t go on to do much meaningful work after that, but I’d call what those two movies achieved more than 15 minutes of fame each; I’d say they both became legends.  Hoosiers for basketball, Rudy for football, and probably Field of Dreams for baseball, although that’s not about playing the game as much as it’s about the love of the game, but still.  I remember watching Hoosiers with my dad years and years ago, how excited by the game he was, and how much he wanted to be a coach like that.  It’s that kind of story, the kind of movie that inspires, that makes you believe that you can do great things, at least for as long as the wonderful characters do just that.

Norman Dale moves to Hickory, Indiana to coach high school basketball, after some time in the Navy and many successes as a college ball coach.  He’s looking for a second chance, since his win-no-matter-what attitude has burned many bridges behind him.  What he finds in this hick town is a love for the game and an unparalleled support for the kids who play it.  Basketball is everything at Hickory High, and the fancy new coach better win now, or else he’ll be run out on a rail.  And it won’t be easy; his methods are unorthodox, his style is brash, the best player in the district has called it quits after the death of the former coach.  Both the boys and their coach have a lot to learn; about basketball, about each other, about work ethnic, and about what it means to be a part of a team.

To balance out the big names cast in this movie, the filmmakers did something truly intelligent; they hired non-actors to be the boys on the team and they shot everything right in Indiana.  The townsfolk, the team, the farms, the rundown hoops; it all feels so authentic, because it really is, and that’s the best thing they could have done to help win our hearts over and to allow us to see this as something other than another sports movie.  Not that the stars weren’t appreciated; Hackman is perfect, Hershey is solid, Hopper is a great sidekick with his own small story line.  But the magic happens on the court; learning the fundamentals, buying in to what the coach is selling, playing as one unit, trusting each other, growing more mature with each obstacle, and finally pulling big dreams so close that they start to shrink down to a more manageable size.  Hoosiers is a sports drama like no other, a chance to cheer for fictional heroes while learning valuable lessons, and it’s an experience I’ll never forget.