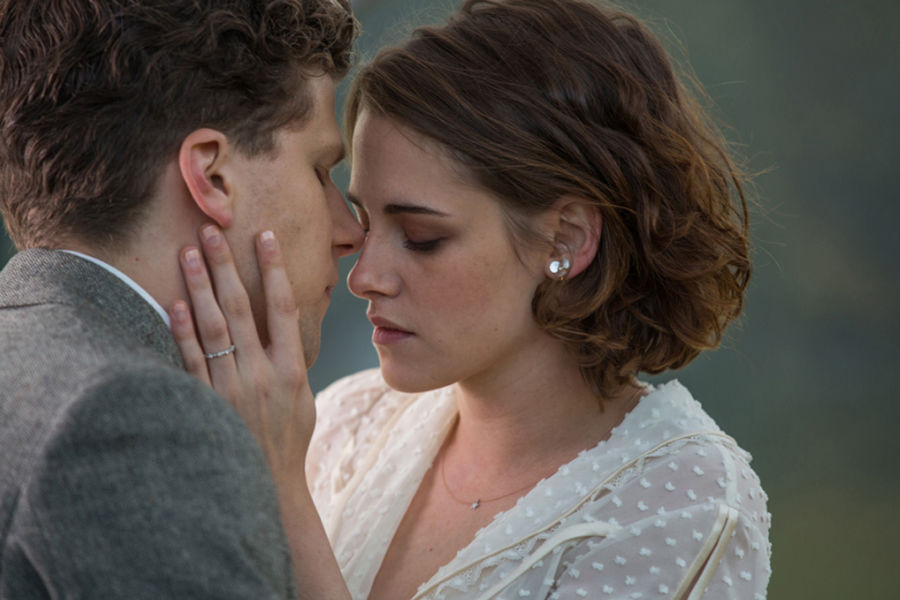 It’s nice that Woody Allen finally found his own replacement, since the days when he could star in the films he also wrote and directed are over.  Eisenberg fits nicely as the anxious New York Jew who seems too unattractive and too awkward to have love affairs, but keeps charming beautiful women anyway.  Allen is the master of disparaging humor and uncomfortable moments, but has aged out of creating those scenes for himself, he needed someone to channel that mood, and Eisenberg was the right choice.  That said, I enjoyed Joaquin Phoenix in Irrational Man much more than I did Jesse Eisenberg in Cafe Society, but those are two very dissimilar films.  This was a throwback to the old way Allen directed and wrote, when it looked like he was headed toward a new and much stronger method.  Sometimes you just can’t get away from yourself, and sometimes that’s to your own detriment. When young Bobby from the Bronx moves out to L.A. to find a job under the wing of his film agent uncle, he encounters more than he bargained for, from cheap lust to lasting love, from crappy Hollywood apartments to star-studded parties.  Film was a booming industry in the 1930s, with lavish mansions popping up all over the Hills and famous actors being produced on an assembly line.  Bobby wanted a piece of the action, and his uncle Phil Stern was the man to talk to.  Phil worked with all the stars, hosted all the parties, and started Bobby down the path toward riches and glory.  But, as he would soon find out, what Bobby wanted most of all was to return to his home in NYC, to fall in love with a great girl, and to harness happiness instead of fame.

The day Bobby met Vonnie he saw an angel.  She was beautiful, down to Earth, not impressed by the California glitz, and everything he could wish for.  But, and isn’t there always a ‘but’, Vonnie had a boyfriend.  She was committed to this guy, even though her feelings for Bobby were evident as well.  He decided not to give up, to stay in L.A., to be her best friend, and to hope that someday she would admit to loving him.  As time passed, the two would grow closer and closer, becoming something special, making plans to be together.  But, as the saying goes, nothing gold can stay, and even young love can be torn apart by simple, human frailties.  The path to happiness is never straight, it’s fraught with twists, with the end never guaranteed. The reason I think Irrational Man worked so well is because Woody Allen finally let go.  He let his actors do their jobs without trying to turn the lead male into an Allen clone, without trying to live vicariously through him.  Phoenix was allowed to play a character that Allen wrote, but interpret him in a way that was all based on his own talent.  In Cafe Society, Allen returns to his normal style, and while I think Jesse Eisenberg is the perfect actor to take on the job of being Woody Allen, I also think that ship may have sailed.  That awkward, nervous, hilarious, dark view on life is something we as film aficionados will never forget, but the magic of it might be beyond recapturing.  Annie Hall, Manhattan, and even Hollywood Ending are things of the past, reaching back into the grave with a hope of resurrecting them and sprinkling in a little jazz glamour isn’t enough.

To be fair, plenty went right, and those things should be touched on in order to give a little positive perspective.  Like I said, Eisenberg is the perfect choice for a role like this, and he has what it takes to pull it off, at least this being more his style than Lex Luthor.  In one completely independent scene with a call girl, Eisenberg was perfectly and hilariously Woody Allen, and really that was the best scene in the movie until the very last image we get, one of reflection and a touch of sadness that almost won me over, right before the credits rolled.  Kristen Stewart was only OK, and I’m actually a fan, Steve Carell was pretty bad, and I love the guy.  Bobby’s Jewish family back home was great, the cinematography was wonderful, and overall the film is enjoyable to view, both purely visually and narrative-wise.  It just isn’t wonderful, and even gives a feeling of certainty that the magical days of that patented Woody Allen style we love are over. Video – With an aspect ratio of 2.00:1 (16×9 Widescreen, 1080p HD), and shot using a Sony CineAlta F65 camera with Cooke S4 lenses and a Sony CineAlta PMW-F55 camera with Cooke S4 lenses, the video quality of the Blu-ray disc was exceptional.  The picture was stunning, with a vibrant use of color, flare, and pizzazz.  This was cinematically a lot like Hail Caesar or other period spectacles, with a great use of costume and set to create the mood.  Visually, Cafe Society was everything you could ask for, and the Blu-ray supported that hard work.

Audio – The Blu-ray disc was done in English 5.1 DTS-HD Master Audio, with a choice of subtitles in English, English SDH, or Spanish.  The audio quality was high as well, with a great use of voice, music, and narration, from Woody Allen himself no less.  The song selection was pretty spot on, with a good jazzy feel.  The sound quality in general was well done and held its own when compared to the video.

Extras – There are only a paltry few special features on the Blu-ray disc.  On the Red Carpet is cast, crew, and friends lining up for pictures on exactly that, and it runs for 2 minutes.  Photo Gallery is a collection of 33 images.  And you can access bookmarks from this menu. Recommended.  Not Woody Allen’s best or worst film, Cafe Society flies somewhere in the middle, delighting some audiences while leaving others unmoved.  Jesse Eisenberg might be the perfect choice to play Woody Allen, but his supporting cast didn’t deliver their A-game, and I think I like Allen taking a different road anyway, leaving his patented style behind in the past where it belongs.  There is enough to enjoy here that the movie should be seen by fans of the director, but not quite enough to make it something important or one of the best films of the year.  The video is excellent, the audio also strong, but the extras are pitiful.  Watch with ease, but don’t expect fireworks; I think the powder got wet some years back and there’s no sense it waiting for it to work.