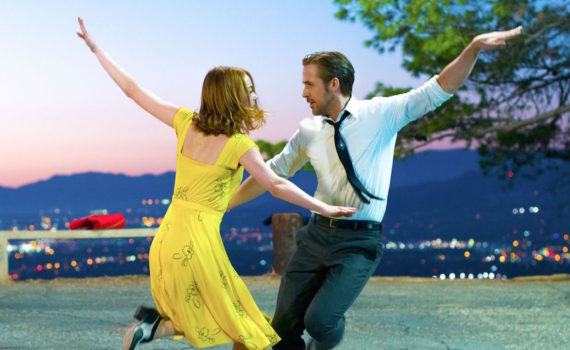 After Billy Lynn’s Long Halftime Walk fell off the top of many Oscar watch lists, a replacement was needed to receive the excessive buzz that always flies around the #1 slot.  La La Land was the film to step up into the breach, bravely deflecting attention from other awards hopefuls.  But this movie isn’t just a pretty face, it has the potential to actually win, and win big.  A modern Hollywood musical starring two of the hottest names in the industry, a dazzling hook of a song, a writer/director coming off back-to-back hits (Whiplash, 10 Cloverfield Lane); sounds like a recipe for success to me, and so La La Land prepared to not just draw fire but to shoot back, perhaps landing itself not just one, two, or three trophies, but a whole fleet, enough to rival the classic smashes of the past.  Audiences who expect this to be the best film of the year might leave slightly disappointed, as it doesn’t exactly live up to its top billing, but there’s enough here to continue to call it one of 2016’s must sees, something you’d regret missing out on.

The lives of two California-dwelling, fame-seeking, romanticism-inclined young people intersect in the way that only the great loves of the movies can, starting a path for them both toward stardom and heartache.  Mia is an actress, or she wants to be, showing up at audition after audition all over town just to be continually looked over.  She serves coffee in the meanwhile, before the riches start pouring in, and is becoming increasingly disillusioned about the life she once dreamed of so fiercely.  Sebastian is a jazz pianist, with music in his blood that boils away everything else.  He imagines that someday he’ll open his own club, play the music that he wants to play, answer to no one, and really keep the old tradition of jazz alive in the way that it was meant to be cherished.  These two romantics meet, fall in love, dream big together, but will have to sacrifice more than they were prepared to give up if they want to make it all work the way it does on the silver screen.

With a beautiful song weaved in and out of a beautiful story set against a beautiful backdrop with two beautiful actors as our guides, La La Land is the epitome of California dreaming and will be remembered long after it’s gone as one of the most attractive movies ever made.  Too much beauty and not enough substance?  Perhaps, but then again, isn’t that Hollywood?  This film represents the timeless air of the studios, the pool parties, the music, and the very sunshine of Los Angeles, while also creating a classic love story to play out across the shiny screen.  There’s a lot to love here, and it’s easy to predict that some primed audiences will fall head over heels.  The music is magical, the mood is sweet, romance is in the air, there’s an old Broadway revival flare to the dance numbers, and La La Land attempts a resurrection of the throwback way of making movies that’s definitely laudable.

But perfect, Best Picture-winning, a dazzling gem?  Not quite, and although this film’s flaws might not keep it away from high praise nor should they earn the movie any scorn, its miss of the mark by just a hair is enough to move it down my list of this year’s best by a few slots.  Whiplash is much better, can we just say that out loud?  Chazelle’s only other feature is better than his second, making its mark with much more impact and using music much more artistically.  Also, even though one or two of these songs are incredible, another couple fail completely, especially the first two numbers of the show.  Speaking of that, Stone and Gosling aren’t singer/dancers, they’re actors, and so theatrically-inclined critics will easily spot voice and movement problems, some of which are impossible to overlook.  The Last Five Years is a better musical, Birdman is a better drama, The Nice Guys is a better comedy, and studios are pumping out way too many Old Hollywood films right now, making La La Land just one of the more buoyant pieces in a flooded market.  I’m not a cynical critic, I really enjoyed this movie, it’s a great experience, but, unfortunately, it simply isn’t one of the very best films of 2016.  What it has going for it is its appeal, not its perfection, which opens it up to so many audiences in such a wonderful way, and could even gain it some well-deserved awards based solely on its heart.  But its problems (Stone, pace, amateurism) keep it from reaching the heights that we might have expected and that may simply have been too lofty.