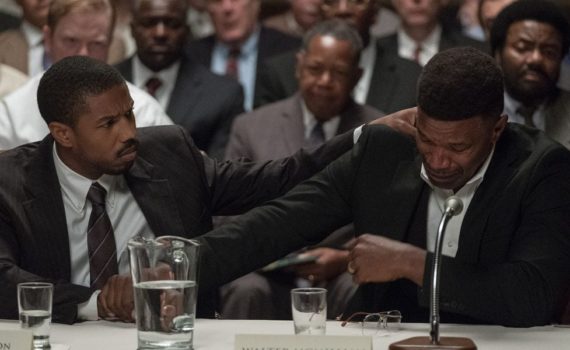 In some ways Just Mercy was an incredible story, and in others it was a horrendous film.  Those things can exist at the same time, it happens a lot, a not-so-talented team gets hold of a good idea but can’t take it successfully to the finish line because, well, they just aren’t capable.  This is Cretton’s third major film (Short Term 12, The Glass Castle), and he seems to be trending downward; borrowing far to heavily, playing down to audiences much more than is necessary, failing to connect with audiences in the manner he did with his debut.  If he doesn’t change things around soon, we’re going to abandon ship, which is something we don’t want to do, especially not with a director who showed such promise.  But if this movie is the best he can do (good, normal, but never great) than we’re going to be justified in giving up.

This is the true story of convicted murderer Walter McMillian and the activist/attorney Bryan Stevenson, who tried to prove to the world that the man they were about to kill was innocent of all crimes.  In Alabama, McMillian has been sentenced to death for the murder of a young woman, a girl who he had no connection to, no motive to kill, and, what’s more, Walter could prove he was miles away at the time of the crime.  Stevenson, a young lawyer fresh out of school and wanting to make a difference, set up shop in the Deep South and went about the mission of investigating death row convictions, checking for holes, coverups, and the potential for second chances.  When he met McMillian and learned the facts, Bryan knew he had to save this man from a punishment he didn’t deserve, and this case would mark the beginning of a long career in social justice that would literally save the lives of so many innocent men.

It’s sad that it’s so easy to recognize the good that Stevenson and his team do, both in helping remove the guilty from death row and in finding those who are guiltless and helping them to freedom.  We very obviously have a problem, especially in the south, of racial bigotry and unfair justice, and we need people like Stevenson to fight the good fight, because so often those young black men can’t fight the battles themselves, with poor representation and their fates already decided in the minds of those who would treat them as less than human.  On a personal note, my sister-in-law does this work, and in Alabama, she finds those who have fallen through the cracks and helps lift them out; noble work in my mind, and something we need to pay more attention to not only in our artwork but in our voting booths as well.

Now, on to the film, which is in no way as powerful as the message it hoped to convey.  It did deliver that message, I won’t deny that, so job well done in that area, we hear you loud and clear, which is important, but it’s also important to keep up the quality while you’re completing the mission, which was a major problem for this feature.  Perhaps the narrative was eased down a bit so that widespread audiences would tune in, similar to some of the takes surrounding Green Book, and I can understand that, you don’t want to appear so high that no one listens, but you have to be careful about coming down so low that you lose all cinematic integrity.  Maybe that sounds confusing, it’s hard to put into words, so I’ll just say that I am glad this film was made and that people saw it, but I do wish the quality was just better.  Foxx wasn’t the problem, he could have been nominated for an Oscar and I would have been happy, with Rob Morgan, Rafe Spall, and Tim Blake Nelson delivering fine performances as well.  But MBJ was one constant brow furrow, one constant level, one note to a shocking degree; I’m almost embarrassed by how bad he was, especially given how good he can be.  Then there’s Larson, who, I want everyone to admit, is completely abysmal.  She’s become a g0d-awful actor, we need to recognize that, and we need to phase her out until she can prove that she’s improved.  The writing didn’t help, the plot was structured so childishly, the courtroom drama stuff was banal, there was absolutely no life breathed into this drama at any point, and only the important message/true story saved Just Mercy from complete disaster.  Watch to be inspired, but close your eyes to the construction, so that you may come away half-happy.