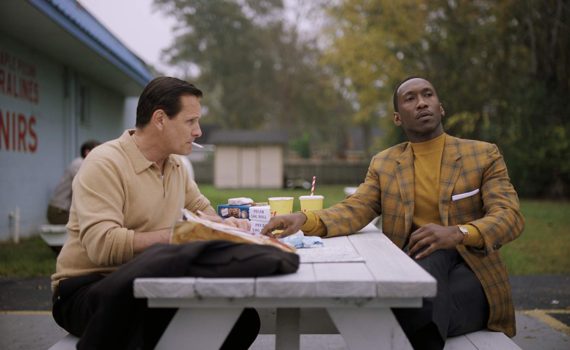 Director Peter Farrelly only does comedies, and I think that’s exactly why Green Book succeeds.  It’s also exactly why a lot of critics don’t like it, but I don’t agree with that side.  If I’ve said it once, I’ve said it a thousand times; Shakespeare knew what he was doing when he layered comedy with tragedy, it makes the jokes funnier by comparison and the deaths all the more deeply painful because you were just laughing.  That’s what Green Book does that works, it balances the humor and the drama in a way that makes the entire film much easier to consume than others of this genre and this focus.  I’m still a critic, I don’t mind a heavy load, but I see how this movie could appeal to a larger audience because of its exact method, and I think the message is one that needs to be heard that widely.

This is the true story of a friendship between two men who were different in every aspect, and yet found a connection through their humanity that transcended color and class.  Tony Vallelonga, known as Tony Lip because of his smart mouth, was an Italian from New York, a bouncer in the Copacabana, a man with a voracious appetite, and the epitome of whatever stereotype of a 1960s white male you want to throw at him.  Donald Shirley was the exact opposite in every way; educated, sophisticated, talented, loved music, and was black, making him a man who didn’t fit in with any group, no matter where he went.  The pair would travel into the deep South together on tour, Tony as the driver and Don as the boss, forging a relationship that didn’t conform to the norms of the time, and lasted decades beyond what anyone would have expected.

I can love a movie that’s almost pure, depressing weight, I can enjoy a comedy that’s entirely stupid, and I can appreciate a film that’s a little bit of both, finding the balance between audience and critic, that sharp edge between too much fluff and total despair.  Those who don’t like Green Book found it to be too flippant with its themes, too buddy cop or buddy racist or buddy bigot, or something of that nature.  I hold the opposite opinion; I think Farrelly did a wonderful job of making a story with a message work just right for a larger crowd, and I think that’s important because it’s the larger crowd that needs to hear it.  I don’t need to be specifically reminded that opening your life up to those who are different than yourself improves your character and your mind, but honestly some people do, and if it takes a “friendly racist” to get that point across, I’m willing to be pandered to just a little, so that others can perhaps be awakened to a truth they may not have previously thought about.  Anyway, on to the movie, which was funny when it needed to be, heavy at times, and always an enjoyable watch, led by two strong performances from Mortensen & Ali that should be remembered this awards season.  Green Book has important reminders, a solid message, more hope that despair, will crack you up occasionally, and shouldn’t be ignored because it isn’t the Greek tragedy that we perhaps too often see this time of year.