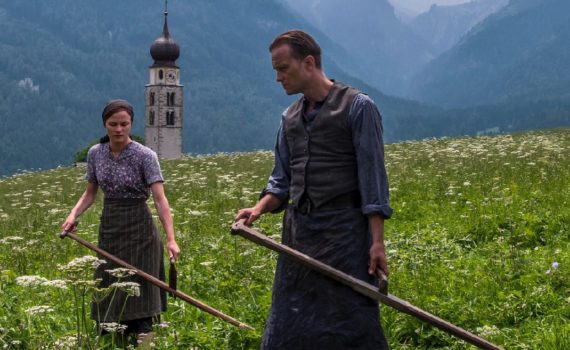 Here’s an idea; make a movie that audiences want to see.  That doesn’t mean skimp on art, that doesn’t mean don’t be true to yourself, that doesn’t mean sacrifice your freedom of expression, that doesn’t mean follow the crowd.  It’s just, artists are simply throwing their own shit against a blank canvas if they have no connection to an audience, whether real or imagined, because art doesn’t live in a bubble, it’s jammed between personal connections, often breaking out under the pressure of those relationships, both good and bad.  For a filmmaker with a ton of obvious talent, Malick seems not to understand that there are people who want to share his vision of the moving world, or perhaps he’s simply unable to share that vision with us, whether from a lack of skill or a complete disregard for humanity outside his narrow focus.

Franz and Fani Jagerstatter are simple Austrian farmers who love their family, their mountain land, and have devoted their lives to God and the teachings of the Bible.  When the Anschluss began in 1938, Franz alienated himself from most in his area by refusing to support the Nazi movement or to swear allegiance to Adolf Hitler.  Though conscripted into the army and serving some time, Franz would return to his farm to work the land, but his reputation as an objector would haunt his entire family.  His days grew even darker when he was asked to join the military again, this time openly refusing to serve, swear, or take up arms against someone who was not his enemy.  Taken to prison and then condemned to death, Franz held to his beliefs in the face of unspeakable evil, knowing that his family was watching and hopefully understanding.

I’m simply sick and tired of Malick and his lovely nothingness.  He gives us nothing, his films are saying nothing, and it’s almost as if that’s voluntary, like he’s intentionally teasing us but ultimately unwilling to give us a taste of his true mind.  Because obviously there’s something there, obviously he has talent, and he has something to say apparently, but he just doesn’t understand how to make the connection between his lips and our ears.  You can almost sense it at times, it’s almost there, and then it’s taken away; I think the guy might just be an asshole.  Either that or he only needs to do shorts from now on, pushing all his thoughts into a small frame, maybe then we we could capture whatever it is he’s trying to set free.  A little convention never hurt anyone, Terry, learn to be a little more normal, for god’s sake.  As it is, you can’t even judge A Hidden Life as a movie; the acting, the structure, the plot, they don’t even matter, because Malick is laying in the tall grass with a wide lens camera taking shots of clouds because, I don’t know, he likes it.  There’s a stirring true story here, but just go read about it, don’t watch this man’s version, because he isn’t a friend to our taste level and he doesn’t deserve to be taken seriously any more.