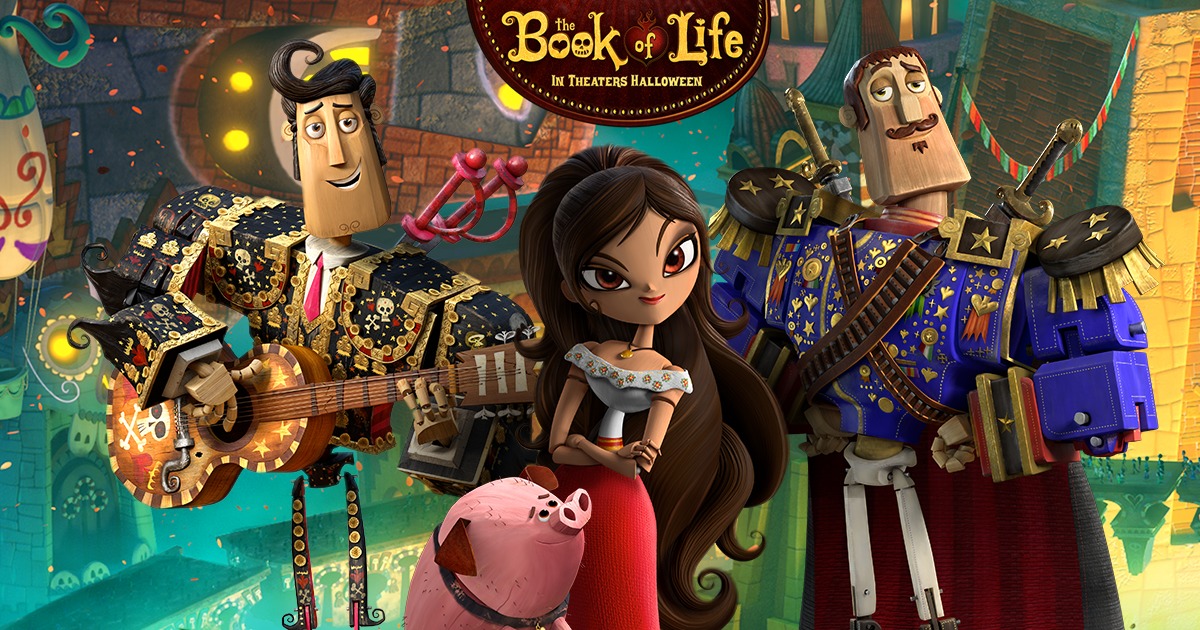 The only other full-length theatrical feature FOX’s Reel FX Creative Studios has produced was Free Birds, an animated film about turkeys that hardly anyone saw & hardly anyone liked. You’ve got to start somewhere I guess, and when your first attempt fails, the only way to go from there is up.  And The Book of Life is definitely a big step up, if not quite reaching Disney/Pixar heights quite yet.  It’s an ode to Mexican culture, a nod to stop-motion style animation, and a copy of what many others have done before; cast a ton of talent is tiny roles and hope some people see your movie.  But while that sounds like a recipe for a cop-out film, this hidden gem is anything but.  It brings a surprising amount of heart, originality, and beautiful visuals to the screen, putting Reel FX on the map & making audiences hopeful that more of the same is on the way.

In the legends of Mexico surrounding La Dia De Los Muertos, or the Day of the Dead, spirits of deceased relatives have two places they can rest: the Land of the Remembered or the Land of the Forgotten.  It isn’t exactly heaven & hell, the rulers there aren’t exactly good & evil, but there’s definitely one great place to be & one that pretty much sucks.  Gathering together on the Day of the Dead means remembering your loved ones, keeping their memories alive, and assuring their place in the Land of the Remembered.  In a small town, Manolo remembers his mother, Joaquin remembers his father.  Both boys, while friends, vie for the attention of Maria, the beauty of the village.  And as they grow, their competition grows, until it results in the death of Manolo, who must now find his way back among the living to help rescue his friend & his love from a terrible threat that quickly approaches their hometown.

The first thing about The Book of Life that will catch your eye is the amazing animation, bringing together modern 3-D images and ancient Day of the Dead art in a way that works perfectly.  The figures of the story are wooden carvings, eliciting claymation, even though that’s not the style used here.  And their background is a vibrant world of color & shapes, making each scene more beautiful than the next.  The story itself is captivating & simple; a love triangle, supporting your family, showing bravery in the face of danger.  And the mix of classic, modern, & original music is well thought out, placed strategically & effectively.  Sure, there’s a little bit of over-the-top humor; the goofy mariachi band, the hip-hop ghost guy, the grunting pigs.  But, if I’m being honest, I laughed, a lot, and I never felt pandered to or tricked.  Instead, I sensed the honest comedy & heart that was invested into this film by people who it meant a lot to.  Don’t overlook this movie; it has a lot to offer, it’s visually incredible, and you just might find yourself emotionally invested whether you want to be or not.