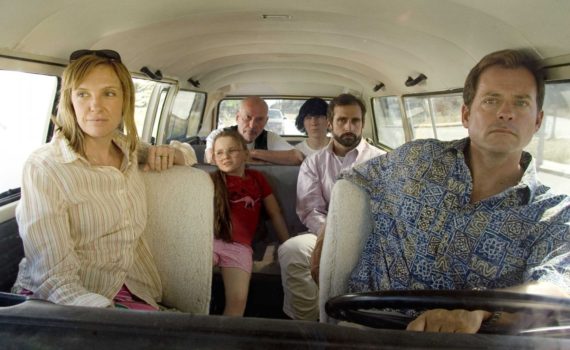 I can remember watching Little Miss Sunshine in the theatre, and afterward saying “wow”, “wow that was great.”  I guess I hadn’t seem it coming, and why should I have?  A team of amateur directors, that little girl from Signs, a comedian in his first serious role, Alan Arkin in his millionth film, and a few mediocre names, all piled into a yellow VW bus on their way to a beauty pageant.  I must have seen enough in the trailer or in early reviews to have my interest piqued, but on paper it doesn’t sound all that impressive.  Wonderful thing about movies; sometimes the most impressive ones are the ones you never saw coming.  Little Miss Sunshine is, to this day and adding in some of my very favorite films, one of the best ensemble dramas I have ever seen.  It’s also labelled as a comedy, which it definitely deserves, but this is a movie at which you can find yourself crying from either heartbreak or humor with similar ease, a story that has almost no equal.

Olive Hoover is one lucky seven-year-old, with a chance to compete in the Little Miss Sunshine pageant in California.  She and her grandpa have been practicing a routine ever since Olive entered a lower level event some time before, and they think she just might have a chance to win.  So the whole, dysfunctional family packs up their things, piles in the van, and prepares for a weekend road trip from Albuquerque to Redondo Beach.  There’s Olive, a flamboyant ball of energy with big glasses and bigger dreams.  Grandpa, who was recently kicked out of his retirement home due to a misunderstanding over his drug use.  Richard, the dad, a motivational speaker and a depressed optimist.  Sheryl, the mom, trying to balance feeding the family with making everyone happy.  Frank, her brother, who was just released from the hospital after trying to kill himself.  And Dwayne, the brother, a young man with a goal who has taken a vow of silence because of Friedrich Nietzsche.  Written out like that it seems like a George S. Kaufman play, which is no insult in my book.

Why has this directing duo done bubkes since?  They did do Ruby Sparks six years later, which I haven’t seen but which also stars Paul Dano and got good reviews, but otherwise nothing.  Why didn’t Little Miss Sunshine‘s success lead to more?  After all, the film was nominated for Best Picture and Best Supporting Actress, actually winning for Best Supporting Actor and Best Original Screenplay.  That’s serious stuff, and this movie deserves every nod.  It really is an ensemble like no other, the cast very literally pushing the plot along with driving legs, never giving an inch or taking a second off.  Every character is a piece of the puzzle, a caricature perhaps, but one that fits into the pie perfectly.  The vow of silence, the attempted suicide, the wild grandpa, the loving mom, the failing father, and Olive in the middle just trying to be a little girl in a strange, strange world; magic, real magic.  And the humor is outrageous, the message simple, the music amazing, the cinematography beautiful.  This is a near-genius film, a once-in-a-lifetime experience, and something I will never forget.