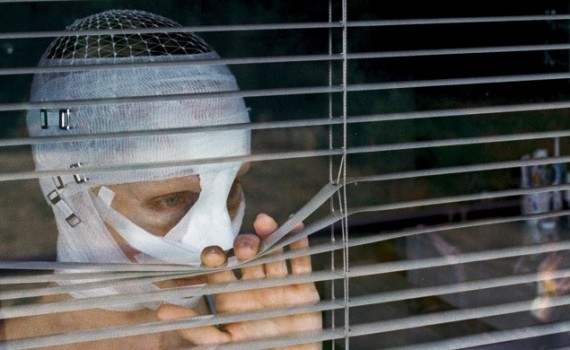 If It Follows is the indie horror surprise breakout film of the year, Goodnight Mommy comes in close second.  It’s The Babadook of 2015, a foreign, small cast, mother/son nightmare that will give us all bad dreams.  But not only are these new films reaching new heights in terror, but the depth of their scare is no longer the shallow ploy of the past.  It Follows had a novel to write about youth, sex, reputation, perception.  The Babadook gave hate & the darker side of our souls a frightening face.  And Goodnight Mommy will haunt us with what it has to say about family, tragedy, and the hopelessness of moving on.  It’s a dark & sad, sordid & terrifying look at the closest of relationships, and how even that can go terribly wrong.

Elias & Lukas are anxiously awaiting the return of their mother, an actress who has recently undergone facial surgery.  The boys spend the summer exploring the countryside surrounding their new Austrian home, Lukas being the braver of the two, both enjoying the corn fields, the ponds, the caves, and the forests.  But when their mother comes back, the boys’ joy turns to dread, as her head is eerily covered with bandages and she begins acting strangely, even refusing to acknowledge Lukas’ presence.  The boys begin to wonder if this woman in their home is their mother at all, a suspicion bolstered by her unusually frequent outbursts of anger and a photograph showing two oddly similar young women.

There is so much to this story that any summary must be vague by necessity, with the details left out to avoid any spoiling.  And, yes, there’s a twist of sorts, but most of it is apparent very early on, given through obvious clues but never completely revealed.  The details of the twist aren’t necessarily the key to enjoying the movie; there’s much more to latch onto than that.  Like the intentionally creepy vibe of the house, the idyllic surroundings, the decaying relationship between mother & son; it’s all connected to a greater plot, one that starts taking turns that you didn’t quite see coming.  This is a film in the vein of the best we’ve been seeing in recent years, deep horror with more point and less carnage, asking audiences to think & feel rather than just accepting the violence on face value.

Goodnight Mommy was stolen from the 1972 movie The Other. The moment I started watching it this became obvious.

Haven’t seen that, I’ll check it out.