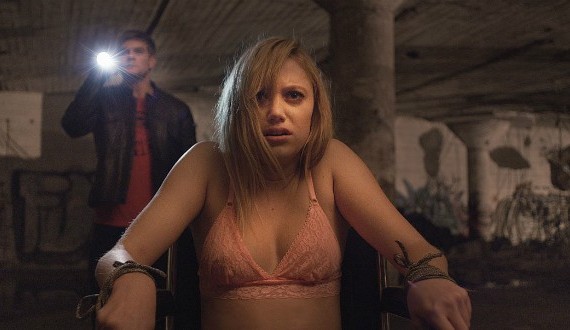 I don’t really like to be scared.  I enjoy horror as a genre, but for me it’s more about the entertainment of the frequent poor quality, the imagination behind the monsters, the over-the-top deaths, the creepy cabins.  I don’t necessarily want ghosts popping out from under beds, angry after one hundred years of curse, ready to steal children’s souls.  So creature features, slashers, b-movies, campy flicks; that’s what I go for.  Ghosts, hauntings, sing-song rhymes, the boogie man; too in-your-face, too sensationalist, and, if I’m being honest, a bit too scary.  It Follows just happens to be about none of these things, becoming a horror off-shoot that somehow also comes off as a blast from the past.  It’s not the gore fest I typically like, it’s not the demon movie I usually don’t care for, but rather something totally different, a film that terrifies & impresses, an instant horror classic.

Jay is a beautiful college student from Detroit, Michigan.  She lives with her inconsequential mother, her little sister Kelly, and partially with two frequent house guests: lifelong friends Paul and Yara.  Jay is dating a young man named Hugh, and one night the two have consensual sex in his car.  What happens next is almost unbelievable, totally insane, and perhaps deadly.  A thing, an it, a person, someone begins to follow Jay, slowly walking toward her no matter where she is or what she’s doing.  Hugh warns Jay to stay away, that this thing will never stop walking, can take on any form, and won’t leave her alone until she has sex with someone else, effectively passing on the curse.  No one can see this creature but Jay, and as she becomes increasingly paranoid, her friends gather around her in support.  But she needs more than that, she needs to break the curse, kill the person, something, or she’ll be followed until the day she dies. First, what makes this movie so incredibly frightening, but still watchable?  At least, watchable with a hand near you face ready to cover your eyes if needed.  And the simplest answer I can come up with is just that; simplicity.  There’s not a whole lot to this plot, not a trick that needs figured out, you get the gist pretty early.  There’s no complicated back story about hikers who uncovered a chest of cursed gold in the 60s and subsequently disappeared.  Jay had sex and now there’s this thing that’s going to follow her basically until she dies.  End of story.  And that’s terrifying.  The relentless fear that pervades the film, the constant paranoia, it’s tiring really, but so very scary in such a unique way.  You see the thing coming, know that there’s nothing that can be done, and you don’t need it to jump into your face to make you pee your pants.

But that’s not all.  That’s what makes the film frightening & exhilarating, but that’s not what makes it great.  What works here is basically everything.  The set up is about as classic as you can get.  The group of Goonie kids, the suburbs, the bike rides through the dark, the station wagons, the jean jackets; there’s a throwback vibe that does nothing but lend credit to this film by nodding to those of the past.  And the music, my god, it’s the sound of terror incarnate.  There’s a colossally scary bass current throughout the movie that chills you to your bones and lets you know not only that something awful is about to happen but also that you have no way of stopping it.  And last but not least (although you don’t notice this during the movie because you’re too busy looking around in the background of the shot to see if the thing is coming again), there are metaphors here that could keep your brain turning for days.  Sex, friendship, youth, reputation, your future; the themes are countless and I have spent many hours since watching It Follows trying to wrap my brain around the possibilities for what “It” really represents.  This isn’t just horror, it’s something both original & masterful, a film that takes its roots and twists them into a brand new, electrifying shape that is bound to be poorly copied for years to come.