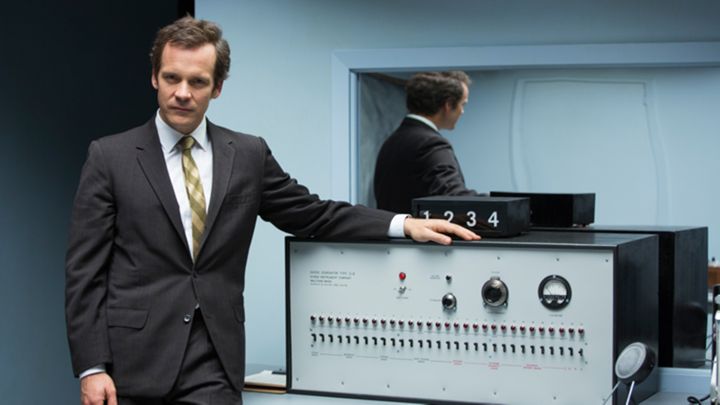 The Milgram Experiments are among the most famous psychological experiments of all-time, right up there with Pavlov’s dogs and the Stanford Prison study.  They are taught in high schools & colleges across the nation and across the globe, representing the importance of the experimentation of theories, since the results might surprise you.  The movie version of this important study comes to us via Michael Almereyda, director of Hamlet, some shorts, some documentaries, and not much else.  The style he chose for his story was the complete opposite of what Kyle Patrick Alvarez chose for The Stanford Prison Experiment, a 2015 true-life film as well.  Alverez went with reenactment, Almereyda went with theatrics, leaving us with part film, part play, and a complete miss of the mark.

In 1961, Stanley Milgram began a series of experiments centered on the amount that authority dictates our individual actions.  Two volunteers would enter a room, one designated the Teacher, the other the Learner.  The Learners would go into a separate room to answer questions.  When these questions were answered incorrectly, the Teacher would press a button which gave the Learner a small shock.  Over time, and as more answers came back wrong, the voltage was raised, the Learner would protest, and the Teacher would begin to feel uncomfortable.  How far was the Teacher willing to go, ignoring the protestations of the Learner, simply because a man in a lab coat remained calm and told them to continue?  This study became Milgram’s legacy, sculpting his future and defining his life. The true story aspect of this film is beyond incredible.  It’s an experiment that you have to see to believe, authority asserting complete control based solely on the desire of the Teacher to do as they’re told, with no force, penalty, or reason to continue.  Why does the Teacher keep shocking the Learner even after they scream?  Because someone told them to.  And while that might seem insane, and while some did walk away, refusing to hurt another human, too many continued with only mild displays of doubt.  Milgram was obsessed with Nazi Germany and the idea that so many followed so few, a small group who were bent on annihilating a race no less.  His theories on control remain important to this day, as a way to understand history and a way to attempt not repeating the past.

Now, on to the film.  I have no idea how, past the real premise, anyone can call this a strong film.  Audiences tend to like it, based on ratings, critics seem to really like it, and I truly do not understand why.  First, the film is only partly about the experiment, the rest is about Milgram; his life, his love, his ancestry, his family.  And, you know, he’s not that interesting.  Pair that with an odd, black-box style that’s almost reminiscent of Our Town, and you’ve got something quite unusual on your hands.  I might have been convinced to like it anyway, to attempt to appreciate the stage-like portrayal of the story, had the actors been any good, but unfortunately they were not.  Actually, they were awful.  Sarsgaard only had one expression the entire film.  Ryder was as horrible as she has always been in every single movie ever.  And the side actors, who might be fine in other projects, were completely wasted here with bit parts, cameos, and stupid lines: Taryn Manning, Anton Yelchin, John Leguizamo, Anthony Edwards.  Rarely do I find a movie this unlikeable, especially with a back story that I’m so fascinated by.  But Experimenter will go down as an exception to the rule in a very, very negative way.