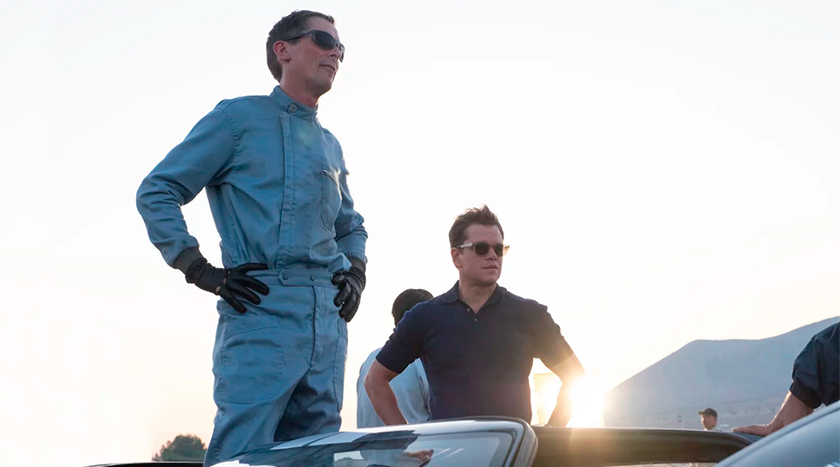 Ford v Ferrari is most likely the best racing movie ever made, Days of Thunder meets The Fighter, sports meet Oscars, and will most likely be nominated for Best Picture, among other awards.  Much of the movie’s success is based on its broad appeal; it’s something you can watch with your boomer dad but also with an eye toward artistic performances around every corner.  We *kinda* had that with Green Book, minus the racist issues both on screen and behind the camera, which I guess you can’t completely eliminate from the narrative since they do exist, so moving on.  FvF is that kind of “everyone let’s go to the movies” type of film, but played much safer and closer to the vest, which will propel it toward general & significant praise.  But that same reluctance to push the boundaries is what will also keep it, in my book, from reaching the rarefied air achieved by some others of this year that are stronger, braver, more original, and simply better, features that went the extra mile to become something especially brilliant.

While Henry Ford II pumped out cars from his Detroit factory and made countless millions giving Americans something to drive, the world changed around him, leaving the love of the assembly line behind for a desire for something better, sleeker, faster, sexier; the baby boomer generation of the 1960s didn’t want their fathers’ Fairlanes any more.  So Ford went into racing, first through stock cars down in Winston-Salem, and then pushing into the European competitions, specifically at Le Mans.  Ferrari was the automaker to beat, they won the 24-hour race every single year, but Ford thought they could do it better, could make a car go faster, and they desperately needed attention drawn to their new endeavor, the Mustang.  The man hired to kickstart the racing program was none other than Carroll Shelby, the maker of the Cobra, and once a Le Mans winner himself.  He hired driver Ken Miles to head the team, and together they took the Ford GT40 to France to show the world that Ferrari and Porsche weren’t the only manufactures with killer instinct, that Ford was here to compete & to win. Americans were bred to love Ford v Ferrari, and the film’s lead actors were born to play these parts.  It really is shocking how perfectly all the pieces fell into place, and that’s after audiences were conditioned since childhood to love stories exactly like this; underdogs working together to create something new, facing so many challenges along the way, all set against a backdrop of U.S. ingenuity and teamwork.  It’s like Apollo 13 but with cars, a film that has no chance of failing to impress us with its tale or immerse us into its narrative.  I’m just another Joe Schmoe along for the ride here; I was captivated from the first sound of an engine roar onward.  To see these cars created, to watch the men who created them struggle forward, to sit pitside for a world famous race; it’s funny to think that we only pay $10 or however much to be given this sort of experience.  This movie is worth much more than that, it’s a gift to the senses and to our love of our own history, and that’s why it’ll be right up there at the front when it comes time to hand out awards.

If you were waiting for the other shoe to drop, you’ll have to wait a minute longer, because I have more good things to say before I turn to why I don’t think FvF is one of the Top 5 films of the year, maybe just Top 20.  It’s the acting that really sucked me in, since it’s the acting that I look to first and foremost when I’m judging a feature.  And really, how could you possibly have gone wrong with this cast: Christian Bale, Matt Damon, Noah Jupe, Caitriona Balfe, Tracy Letts, Jon Bernthal, Ray McKinnon, or even Josh Lucas, who is in no way a good actor but played the heal rather spectacularly, and by spectacularly I mean detestably.  Everyone filled in the gaps between the lines, the race became the focus, you could feel the car under your seat, I walked out pumped, and I can’t imagine there were many who didn’t feel that same way.  My only real reservations are that I felt the film sticking to the same ol’ script too much, clinging to the cliches because they knew they could and still win big, passing on opportunities to venture out because they really didn’t need to.  That timidity will keep this film from the absolute top of my year end list, but I completely understand why they didn’t feel the need to break the mold; when the mold is this good and you’re filling it with such talent, risk might become unrewarding, and success might just fall in your lap.