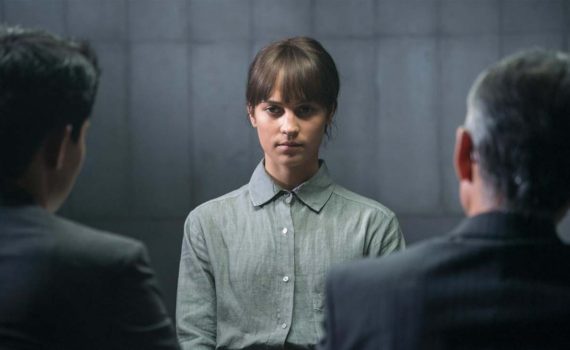 Westmoreland’s only shining moment is Still Alice, which is actually Julianne Moore’s shining moment, so I guess the dude is still looking for his, and it won’t come with Earthquake Bird, mostly because it’s awful.  Netflix has definitely had its moments, its successes, its “see that building” films, but its latest thriller? drama? romance? isn’t one of them.  In fact, it’s one of the worst features I’ve had the displeasure of seeing all year, right down there with Aftermath and Polar, which are two flicks whose love child Earthquake Bird bares a passing resemblance to, a mix of the grandiose and the absurd, which can work sometimes I guess, but doesn’t here.  And believe me, no one is more disappointed, because I wanted to love this film, it’s just not worth it, which is mean to say about a person but fine to say about a movie, right?

Born in Sweden but having traveled the world, Lucy now considers herself a native of Tokyo, the land in which she chose to put down roots, learning the language by setting her mind to the task and whisking away from a troubled past life as soon as she was old enough to leave.  She works as a translator, plays classical music, loves Japanese culture, and mostly keeps to herself in a semi-strange and awkward bubble that shows signs of the personal problems hidden deep within.  The first person to get through that protective layer is Teiji, an odd yet alluring photography, who makes Lucy feel seen.  Second is an American named Lily, who is a free spirit and needs a friend who speaks the language.  The trio becomes close, but that’s sure to end badly, as jealousy rears its ugly head and one by one characters wind up dead.

If you really wanted to, you could dive into this story and try to work out all the metaphors, try to unravel all the twists and possible meanings.  Are Lily & Lucy representations of the same person, does Teiji stand for something inside Lily, is the violence just internal struggle, what does it all mean?!  And that can be fun, I’ve found myself picking apart the allusions within great films, that can be part of the enjoyment, going deeper, but Earthquake Bird doesn’t deserve that; it’s too poorly done on the surface to warrant a closer look.  There might be potential unearthings, but I can’t be bothered, no one did their job well enough to suck me in and make me care, which is the whole purpose of making movies, IMHO.  I love Vikander, Keough is cool, but their characters were so cliched, as were all the details of the film, from the love triangle to the murder mysteries, just one big “yeah maybe you’ve seen it all before but I don’t care hey come watch this throwaway Netflick.”  It really did seem that flippant and under-rehearsed, like no on involved cared, and so neither, ultimately, did I.