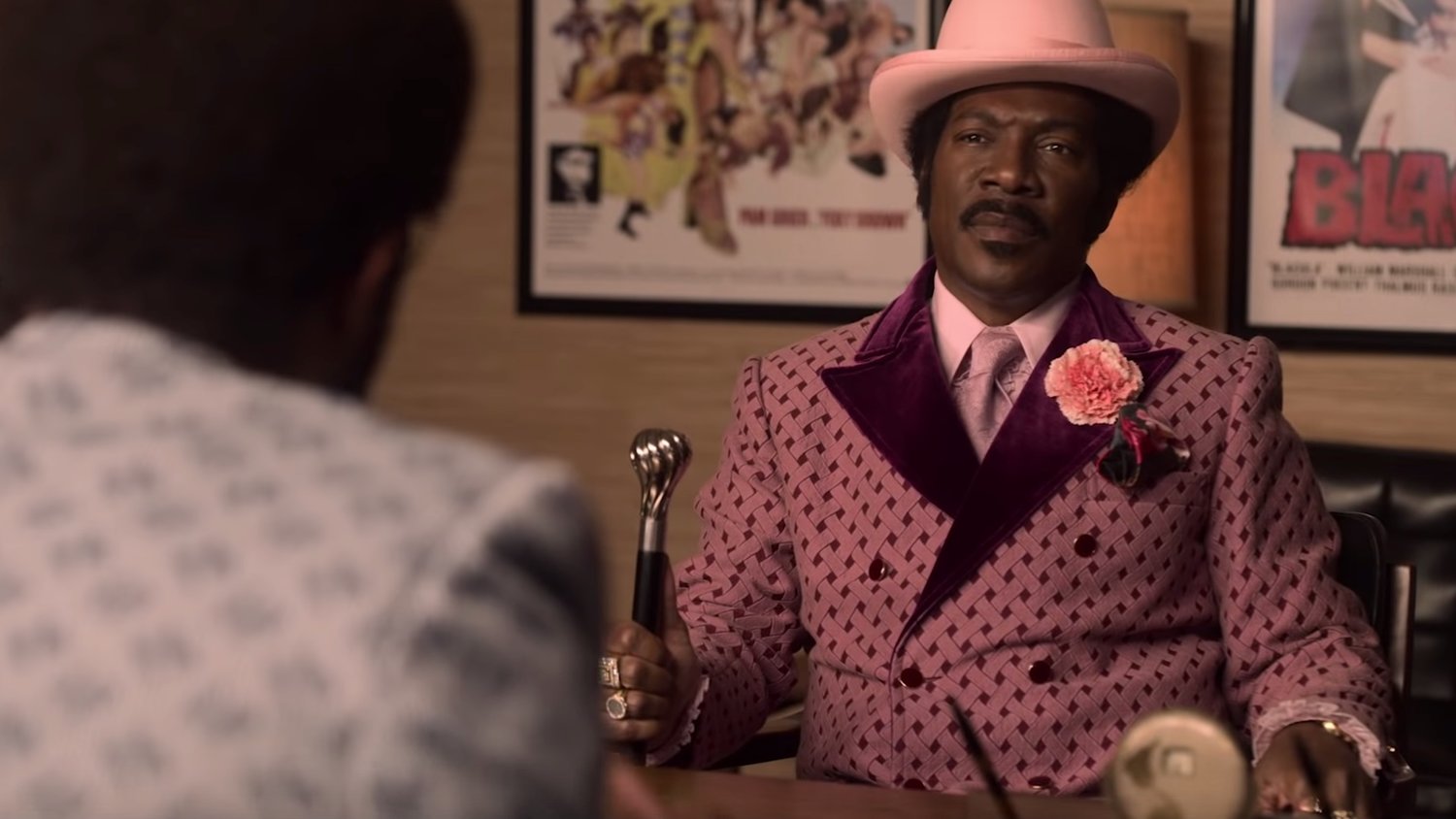 Dolemite Is My Name is this year’s Disaster Artist, a film about a film and a movie about a man who had no idea what he was doing.  The Room flopped, but would go on to be the world’s #1 cult classic, while Dolemite broke big against all odds, even if it was the worst thing ever to happen to the big screen.  This true story is hilarious and spectacular, with some real history behind it; Rudy Ray Moore is considered the Grandfather of Rap, with his pioneering rhythm and style, changing the world of music and entertainment generations after his own rise to fame.  But this Netflix original still has to be judged on its own merit, beyond its storytelling, and that’s where it might start missing the mark.  Eddie Murphy & his pals obviously had a terrific time on set, but Dolemite Is My Name is still a goofy flick with half-amateur actors across the board; your desire to love it might not ultimately overcome your better sense.

Rudy was an entertainer first, a hustler second, but under that confident exterior he was just a guy getting no younger, failing to make it big, and wondering why no one wanted what he was offering the world.  He’d traveled, performed, done comedy, dance, different characters, but nothing seemed to be working, and his dream of stardom faded with every passing year.  And then came Dolemite, his alter ego, a foul-mouthed pimp who Rudy crafted from street legends and old timey humor, who said what he wanted and took no shit from no body.  Dolemite was a hit, but Rudy could sell his comedy records underground, no stores would carry his material.  And when he & his friends made a Dolemite movie with Rudy’s last dimes, no studio would touch such a raunchy & ridiculous flick, no matter the cult following.  How Dolemite became a phenomenon and how Rudy became a cultural icon are both legendary stories, brought to life by Eddie Murphy and a team of superstars for your own personal entertainment; you’re welcome and good night.

This is a true story, which is pretty awesome, and Rudy Ray Moore would really go on to inspire rap pioneers of the 80s, so that’s cool too.  But this movie and the original are both insane, so you’d better know what you’re getting into, if you want to have any chance of enjoying what you’re about to see.  Think Disaster Artist but in blaxploitation style, and if you don’t know what blaxploitation is you better Wikipedia that shit (or watch Shaft, Foxy Brown, Coffy) before you dive in.  If you do take the plunge, know that there’s a lot of love put into Dolemite Is My Name, a lot of effort to bring the legend of Dolemite to life and to light, which I respect independent of my more critical view of this film.  The cast was solid, that’s for sure: Eddie Murphy, Da’Vine Joy Randolph, Keegan-Michael Key, Mike Epps, Craig Robinson, Tituss Burgess, Snoop, TI, Luenell, Wesley Snipes, Chris Rock.  But they aren’t all “real actors”, which shows, and you’d better be ready to forgive their inabilities, because that shows fairly clearly too.  People are talking about an Oscar for Murphy, but I don’t quite see that, even if he is the undeniable star and best actor in the movie; he didn’t have that high a bar to reach.  Dolemite Is My Name is an important piece of American cinema because its source material is, not because it would be on its own, which should be remembered when rating, even if your heart would give it more stars.