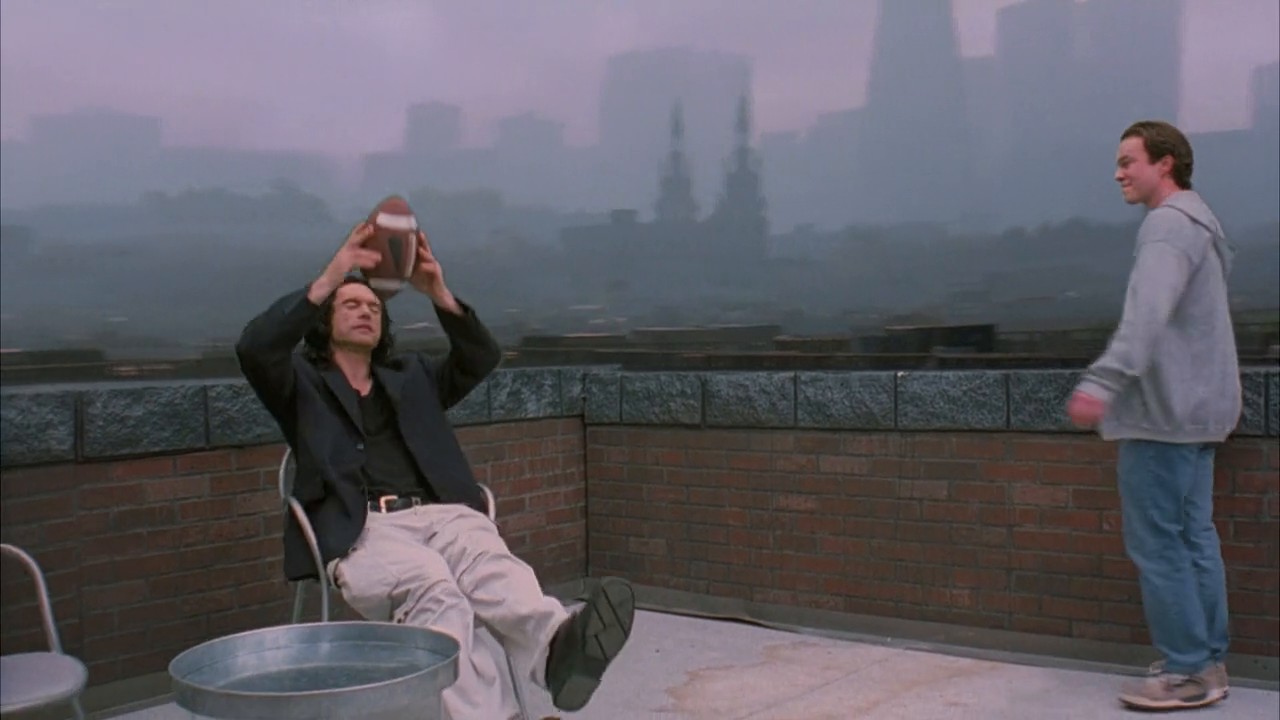 With the release of The Disaster Artist, James Franco’s homage to horrible filmmaking, its subject has received a boost in appreciation, or at least in exposure.  The Room is heralded as the best worst movie you will ever see, and since I had never seen it, I figured I had better remedy that before seeing the modern comedy based on its wacky success/utter failure.  To call this film a cult classic would be an understatement; cult classics are bad but loved anyway, whereas The Room is barely cinema and yet will live forever in glorious infamy.  That makes for a confusing review, trying to capture both how hideous this feature is and how talentless its players, but while also trying to explain why you need to see it as soon as you possibly can.

So, here’s the plot, as much as there is one.  Johnny is a successful businessman in San Francisco; a good job, nice clothes, a beautiful girlfriend, a cool apartment.  But his luck turns when he misses the promotion at work and his girl, Lisa, starts giving him the cold shoulder.  She’s tired of him but hasn’t told him so, is supposed to be getting married to him but doesn’t actually want to.  She’s recentlyy been eyeing Johnny’s best friend Mark, a tall, blonde, hunky dude who she knows can keep her satisfied.  So she begins to distance herself from Johnny, even getting him drunk and claiming that he hit her.  Meanwhile, Johnny notices the change but doesn’t know what to do, all while taking care of a young friend named Denny who is in a a bit of trouble.  It’s a mixed-up world, but someone’s got to live in it.

I say this having watched all the Sharknados and Surf Nazis Must Die; The Room is the worst movie I have ever seen.  Wiseau directed, wrote, produced, and starred in it, even making up his own film company to fund the picture, though where the money came from is anyone’s guess.  He wanted to be an actor so he created a movie himself, so that no one could tell him no; that’s one way to do it.  Problem is, he can’t act, like not at all, to the point that it’s painful to watch him walk across a room in front of a camera.  It’s the most terrible attempt at emoting that you’ll ever seen, and each of his lines is ludicrously unbelievable and delivered like an Austrian man is reading English text for the first time.  Who knows where the guy is from, but not from San Francisco, or from New Orleans, which he also claimed.  But it doesn’t matter; he could have been from Hollywood itself, could have been born in a studio, and it wouldn’t have changed a thing.  Wiseau didn’t stop at delivering the bad dialogue, he wrote it as well, and the conversations make as little sense as the plot.  They play football for no reason, a woman announces she has cancer, a thug tries to beat up Denny; we don’t know why, it doesn’t matter, just enjoy the ride.  You have to see this movie so that you can believe it, or simply so that you can quote it for the rest of you life, because it really is that bad/good.