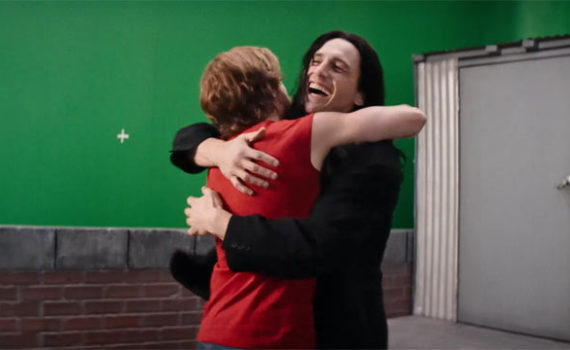 You know your ridiculously horrendous cult classic has reached a whole new level when Hollywood comedians want to create a making-of film for a new generation of movie buffs, just so that they can also enjoy how awful your attempt at making a motion picture actually was.  The Room is known as the best bad movie ever filmed, Tommy Wiseau’s pet project crashing & burning immediately, but somehow rising from the ashes to become something that millions have found entertaining, if not in the exact way it was originally intended.  Franco’s homage will bring The Room back into the spotlight in a big way, hopefully pushing a whole new wave of audiences into theatres to enjoy this piece of cinematic history, keeping the spirit alive a little longer.

This is the semi-true story of Tommy and Greg, two friends who wanted to be actors who decided not to take no for an answer.  Both were struggling in San Francisco, so they took a leap of faith and moved to L.A., where they hoped their careers would take off.  Tommy had money, somehow, and so he paid for everything, including an apartment the duo shared, but the roles didn’t come rolling in, probably because they were both talentless.  But that wasn’t going to stop them, Tommy would just spend 6 millions dollars on funding his own film company, directing his own movie, starring, of course, him.  It would become the worst movie ever made, a complete dud, but a future success in an entirely different and unpredictable way.

As funny as The Room is, The Disaster Artist just kicks it up a notch, or at least kicks it over a category, becoming a comedy about a flop that’s funny because it’s true.  Franco pulls off Wiseau with a flare, nailing the accent, becoming the caricature, losing himself completely is a role that was seemingly made for him.  Because he’s not a great actor, neither is his brother, but they work here, mostly because you can tell that they loved pulling apart this film.  They hit all the details, from the football to the florist’s dog, from the multiple title credits to the embarrassing sex scenes.  You could possibly watch this without watching what it’s based on and still find it funny, but I wouldn’t recommend that; The Room is just too necessary, and it’ll help you find the humor in the little moments in The Disaster Artist.  Watch for a while after the movie ends too, there’s more to see, and each moment is precious when it comes to the insanity that is this classic.