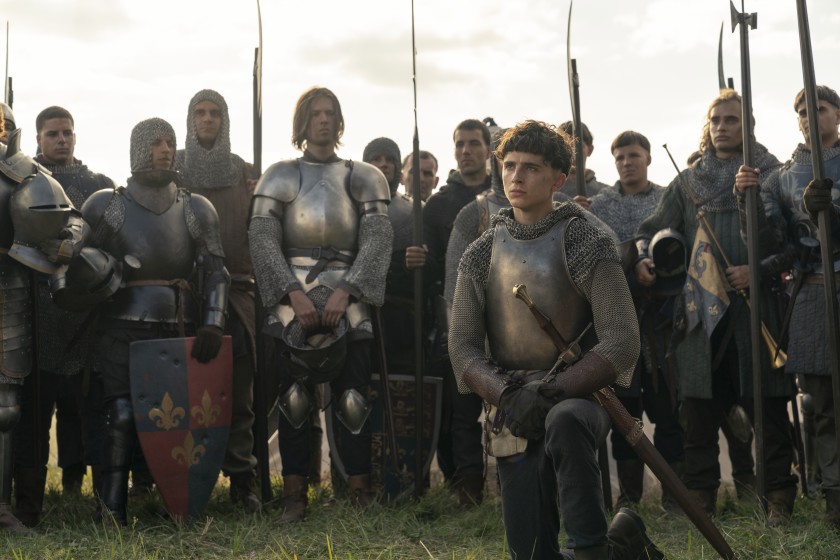 The King is a film aimed at a very specific audience, one that loves Timothee Chalamet and Age of Empires equally, and wants to see Timmy play the Agincourt campaign from The Conquerors expansion.  That reference just fell flat if you didn’t play that computer game in 2000, but it’s one of my favorites of all time; I spent (some people would say wasted) countless hours working on civilizations, defeating nations, and reliving history through that game, and I love that this movie brought a lesser-known battle to life in a form I never thought I’d see.  Still, not many audience members will want to see that event take place, with the protagonist played by Chalamet, and done in the style of two movies we’ve recently seen (more on that later), so it’s a bit of a surprise to see it fleshed out in the form of a Netflix original.  But hey, to each his own, and I just happen to check all the boxes, which means I’m on board, although I’m hesitant to recommend you take the same boat.

King Henry IV is close to death, and so dies his efforts to conquer England’s longtime foe, the ever formidable France.  His son Henry, known commonly as Hal, is the next in line, but he’s no King; his younger brother is more his father’s favorite, Hal too busy carousing to take politics seriously.  But as chance would have it, Hal’s brother dies soon after his father, so fate has decided that he must take up the throne.  Soon, Henry V becomes a feared English king, able to sniff and snuff out dissension with brutal swiftness.  He takes up his country’s campaign in France with equal measure, invading their shores and besieging their castles with ferocious speed.  When the Dauphin responds with a great army, Henry and his men stage an outnumbered attack near Agincourt, in what will become one of history’s most famous battles, with English longbowmen and Hal’s ruthless tactics taking center stage.

David Michod shows that he generally knows what he’s doing by constantly casting Joel Edgerton, Robert Pattinson, or both, in his movies; those two are absolutely brilliant, and any director who can see that is, in my book, brilliant as well.  Edgerton, Pattinson, Chalamet, Harris, Ben Mendelsohn; that’s one hell of a cast, The King gets that part completely right, and each man pulls his weight perfectly, even in small parts.  And as I said before, I was set up to like this movie; Chalamet’s acting, Agincourt reenacted, Age of Empires game play right before my eyes, and, in general, a period of time I am mildly obsessed with.  But I can’t imagine this is everyone’s cup of tea, it’s very specific, although well-done, and not everyone will be the perfect target.

Then there’s the lovechild issue; it’s a bit too easy and sloppy to say that a film is simply a mashing of a pair that have come before, but I’m about to say it anyway.  Take Macbeth & Outlaw King, play them simultaneously, and you’ll have The King, it’s eerie, and probably a bit cheap.  This story is based on Shakespeare’s version more than actual history, and plays like the Robert the Bruce tale, so you’ll swear you’ve seen it before, and that’s not to the credit of Edgerton & Michod, who co-write the film; they should probably be docked points.  Regardless, The King is a cool, brooding, muddy succession story, with plenty of blood and battle, so you won’t leave disappointed if that’s what you’ve come to see.  But it does copy too much from two flicks, and it is narrowly aimed at those who already know/enjoy this history, which may not be you.  Netflix made something strong here, something cool, but not exactly original, and definitely not incredibly Oscar-worthy.