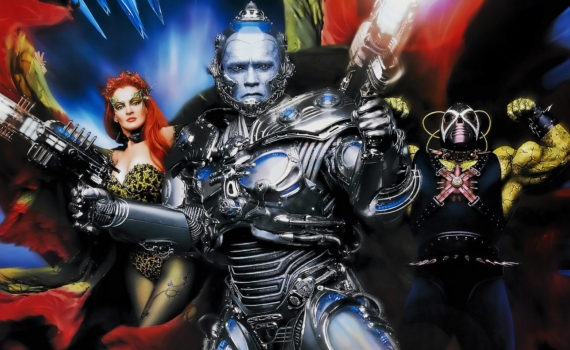 As Batman Returns is better than Batman, Batman & Robin is better than Batman Forever, if across much less of a chasm.  #2 blew #1 out of the water, not even close, Tim Burton fixed his own flaws, but Joel Schumacher was able to conjure up much less magic, making #4 an improvement over #3, but not nearly enough of one.  No, Batman & Robin is still stupid & stupefying, but at least it’s a little bit fun along the way, not just noise like its immediate predecessor.  That said, it still sucks, and hard, which makes you thank Christopher Nolan all the more for stepping in eight years later and fixing the superhero we want to love.

Batman and his new buddy Robin are facing off against the sinister Mr. Freeze, who wants to put the world on ice, although he’s not really, truly evil; his story centers around a love that he’s desperately trying to hold on to.  But he’s still not being nice to Gotham, so he’s gotta go down, but, at the same time, the Dynamic Duo will have to face another foe, the clever Poison Ivy.  She wants to kill all humans so that plants can dominate, and she’s got the muscle, a dude named Bane, to back her up.  Luckily, along comes a girl named Barbara who might just help our heroes at exactly the right time, making the duo a trio in the process.

So, it’s still not good, Schumacher still doesn’t know what he’s doing, but at least this time around the action is a little silly in a good way, poking fun of itself as much as anything.  And Clooney is a better actor than Kilmer by far, obviously, so that helps as well.  Still, O’Donnell is the worst actor ever, Silverstone isn’t much better, Arnold can only bellow, and Uma Thurman is asked to do too much; she can’t go it alone.  But at least there were a ton of characters, a ton of fight scenes, a lot of ups & downs, that’s something, and it does make the movie at least watchable.