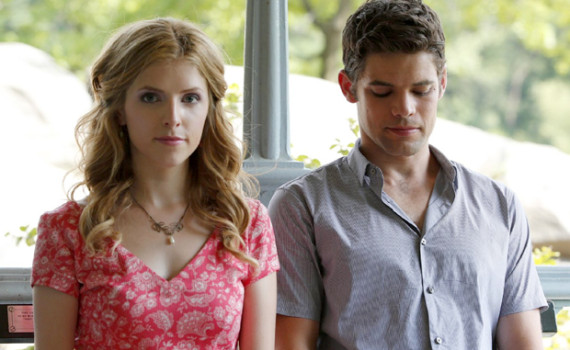 It’s unfortunate that not everyone loves movie musicals.  Or stage musicals for that matter, but that’s a topic for another day.  When I was preparing to watch The Last Five Years I noticed that the reviews & ratings on IMDb were just mediocre.  For that matter, so are the reviews & ratings for Into the Woods.  A Little Night Music is seen as sub par, Les Miserables was a moderate hit, and I can only assume that Johnny Depp’s star role is the main reason that Sweeney Todd is thought of so highly.  Movie musicals just aren’t for everyone it appears.  Thought it begs the question; who’s watching them?  If you aren’t a theatre geek you probably won’t love Sondheim on screen.  And if we assume that your average audience member doesn’t desperately love Broadway, then the majority of users rating these movies just aren’t going to think they’re phenomenal.  But a few of us grew up around the stage, performed perhaps at an amateur level, actually listen to theatrical soundtracks, and love the movie versions of what the stage has brought to life.  The Last Five Years is one of the best movie musicals you’ll watch, assuming that you’re primed & ready. The Last Five Years is a musical written by Jason Robert Brown; the music, the lyrics, and the book.  It debuted in Chicago, has been performed off-Broadway, and then became an international hit.  It tells the story of Cathy & Jamie, a young married couple who exemplify the ups & downs that are possible in a passionate relationship.  The story is told from two simultaneous perspectives and from two opposite chronological orders.  With each some Cathy sings, she tells the couple’s story from end to beginning, starting with their breakup and moving backward toward their genesis with each song.  Jamie, on the other hand, tells the story from beginning to end, with each song a step forward in time.  The pair take turns singing, with their stories intersecting in the middle at their wedding, and then barreling on toward separate ends of the story as a whole.

Cathy is an actress, or wants to be, a girl who left her home in New Jersey behind a long time ago.  She moved to the city, went on a million auditions, but can’t seem to get over the hump.  Maybe she’s not young enough, not skinny enough, not blond enough, but whatever the reason she’s beginning to think about giving up.  The only job she can consistently land is at a summer theatre in Ohio, where no one respects her talent and the atmosphere is nothing like New York City.  Jamie is a writer, or is trying to be, a Jewish boy whose family wants him to marry a good Jewish girl.  He’s very talented, and when Random House shows an interest is his newest manuscript, the calls from excited agents come rolling in.  He’s on his way up, she’s on her way down, but together they make a nearly perfect pair.  Their love carries them along, at least until times get too tough, when its strength is tested more than they ever thought it would be. What’s not to love?  For the theatre crowd who also love the cinema, this is a match made in heaven.  The concept of the show is just original enough to pique your interest, but not so gimmicky that it distracts from the story.  The Disappearance of Eleanor Rigby was too much of a trick and didn’t have a strong enough base; not a problem here.  The plot is simple enough (boy meets girl, love ensues, trouble comes along) that it was able to slide well into a little chronological shift, a bit of a switch in the order that only made the delivery stronger.  And, really, it didn’t need any help.  This is a phenomenal musical, with songs that demand that you get the soundtrack immediately.  Well written, never dull, always honest, catchy, modern, singable, and not melodically complicated like a Sondheim show, which does throw some people off a bit.  This is a mass market play, not to discredit its quality, but it just comes across with too much ease not to comment on its wonderful & smarty crafted simplicity.

Anna Kendrick & Jeremy Jordan are the only characters in the show, and support the plot single-handedly.  In the stage version they don’t even interact at all, singing separately except for the wedding at the middle and the end of the show.  In the movie, they act out their scenes with a small amount of dialogue, but mostly the action is operatic, with the songs telling the story.  Kendrick is spectacular, playing Cathy with heart & realism.  Jordan is a fresh new face who we’ll see again in many more movie musicals over the next few years.  The pair had great chemistry, creating a sexy feel in the happy moments, a terribly saddening feel on the down beats, and always seemed connected with each other.  If I were looking for something to critique I would point to the music and Kendrick not always being in sync.  Not in timing, but emotion, as sometimes the power of her vocal wasn’t being portrayed on her face.  That’s the negative of dubbing and not singing live I guess, and can’t be totally avoided unless you perform on set the way Les Miserables did.  But, that detail aside, this is as good a dramatic musical as you are likely to watch, though I assume it will still be rated lowly.  The Last Five Years is better than you might think, though perhaps only if you’re in the musical minority.

Video – With an aspect ratio of 2.40:1 Widescreen presentation, the video quality of the Blu-ray is spotless.  The color, the clarity, the balance, the light & dark; all filmed with an eye to detail and transferred to the disc seamlessly.  The picture quality is as good as you can expect from a high-definition disc, allowing the visuals to shine and the images to remain beautifully in mind.

Audio – The disc was done in 5.1 DTSHD Master Audio.  There are no language options, but the film can be viewed with either English for the Hearing Impaired or Spanish subtitles.  The audio quality was high, with precedence given to the clarity of the vocal performances.  The sound was clear, controlled, balanced, never heavy, allowing the songs to become the highlight of the film.

Extras – There are only two extras on the disc.  The film can be watched with Sing-Along Subtitles, basically the standard movie but with lyrics at the bottom of the screen whenever an actor sings a musical number.  Also, A Conversation with Composer/Lyricist Jason Robert Brown is just that, a 4-minute featurette with the writer of the stage version. Highly Recommended.  Count me among those who love musicals, both on stage & on screen.  If that’s not you, then watching movie versions of Broadway plays may not be the best use of your time.  Not that The Last Five Years is The Music Man, a classic stage show that modern movie-watchers might not enjoy.  On the contrary, it’s an updated version of a classic love story, set to excellent music, and performed wonderfully.  But still, the genre as a whole might not be for you, and so I’d advise you to watch something else.  For those who loved Into the Woods, this film should find a place in your heart.  The video is stunning, the audio no less so, but there are not many extras available on the disc.  I’m curious about the original play, whether I’d enjoy it as much as I enjoyed this, and perhaps someday I’ll find out.  Until then, I’ll make do with one of the best non-epic movie musicals I have had to pleasure to watch.