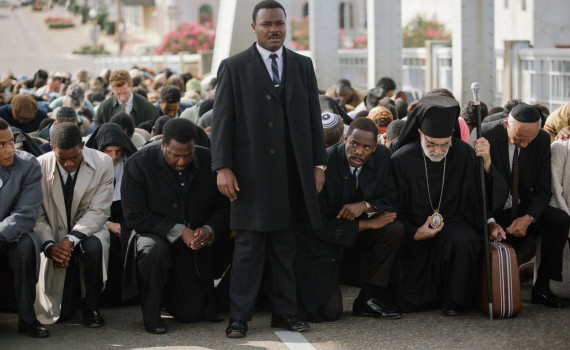 This march would become one of the most significant events in the fight for racial equality.  And, like most major events, it was confronted with violence.  The march from Selma to Montgomery was a demonstration, a peaceful protest against the inequality of the times, the backlash against the new voting rights, and the ill treatment of Southern blacks.  Officials and police demanded that the march be stopped, the President would not give his complete support to the movement, and Dr. King was left to lead a people who he knew would be attacked along the way.  As he struggled with this knowledge, he also battled against his own doubts, a complete lack of support, and family troubles that made him question his own position as leader.  This was an event that was almost too difficult to pull off, but also one that was too important not to. But there’s more than the back story, and that’s what makes Selma so incredible.  I said in the introduction that so many directors take the dramatic true story, bring it to the screen, but forget to make a great film in the process.  Perhaps it would be more accurate to say that they are incapable of creating a solid movie independent of the reality of the plot, but that’s definitely not the case here.  Ava DuVernay put her mark on every scene, focused every moment toward an ultimate goal, and delivered a movie to be proud of, not only for the moral told but for the quality of the package as well.  So much credit must go to David Oyelowo, who put everything he had into the role of Dr. King, in the big speeches and in the small moments, making this great man seem both larger than life and also a tiny piece of the puzzle.  Awards all around were deserved, regardless of the almost complete lack of nominations; a Best Director, a Best Actor, and perhaps even a Best Picture, for Selma shines in truth and in the portrayal of that truth, a film that must be seen. Video – With an aspect ratio of 2.35:1 1080p HD, this Blu-ray will blow you away.  The film was shot using an Arri Alexa XT Plus camera with Hawk C-Series, V-Lite, V-Series and Angenieux HR lenses.  The video quality is amazing, delivering stunning images and crystal clarity.  The picture is top-notch, with dazzling color, great balance, and crisp shots one after the other.  Disc 2 of the set is a 16:9 Widescreen DVD, also with great video quality.

Audio – On the Blu-ray, the audio was done in English 5.1 DTSHD Master Audio, with a choice of French 5.1 Dolby Digital or English Audio Description.  Also on the disc are your choice of subtitles: English, English SDH, French, and Spanish.  Commentary can also be selected from the audio menu: Commentary by Director Ava DuVernay and David Oyelowo or Commentary by Director Ava DuVernay, Director of Photography Bradford Young, and Editor Spencer Averick.  Disc 2 of the set is a DVD offering audio choices between English 5.1 Dolby Digital, French 5.1 Dolby Digital, English Audio Description, and Subtitles in either English, French, or Spanish.  The sound quality of the Blu-ray is excellent, with a perfect use of music and a nice audio balance throughout.

Extras – There are more extras on this Blu-ray than I have ever seen on a disc before.  Both commentaries from the Audio category can be turned on in the Extras category as well, beginning a long list of special features.  The Road to Selma: 13 minutes, a look at the history that created the film.  Recreating Selma: 26 minutes, a behind-the-scenes look with making-of and character introduction.  Deleted and Extended Scenes: 6 total: There Is No Peace Here, Precious Lord, Extended Cager Lee, Strategy Session, Testimonials, David Oyelowo Picture Look.  “Glory” Music Video: 3 minutes, music by John Legend & Common.  Historical: newsreels & images from the actual events.  Selma Student Tickets: Donor Appreciation: a list of & thank you to donors who helped give over 300,000 tickets to students.  National Voting Rights Museum and Institute: 8 minutes, a look inside the historical site.  Selma Discussion Guide: a summary of the film in written form with questions to ask both before and after watching. Highly Recommended.  Selma could very well become a film that is shown to all American students in school, a movie that is more than a history lesson, a film that captures an amazing time and brings it to life.  It’s a time worth remembering, a historic moment that shouts importance, an event we shouldn’t forget.  And Selma not only portrays is perfectly, but it never relies too heavily on the drama of the true story.  The film is always strong independently and deserves all the praise that so many of us hoped it would receive at the Oscars and elsewhere.  The quality of this Blu-ray is incredible, with stellar video, excellent audio, and extras galore.  Watch this film with confidence, not only for the story but for the production value as well.  Share it with a friend, let your local school know of its importance, and keep it in your mind; it’s both a wonderful movie and an incredible story.