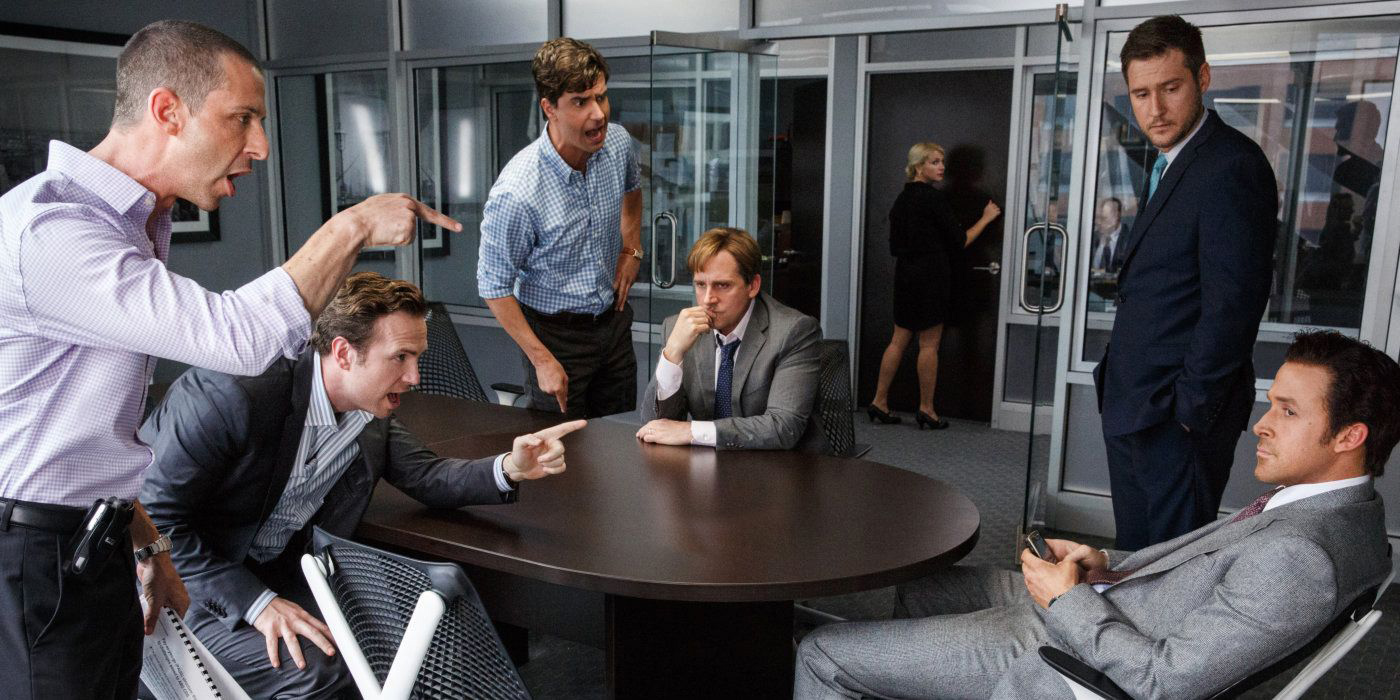 Gather together three of the hottest Hollywood hunks in the business and give them all incredibly awful haircuts.  But don’t make any of  them the lead, give that position to a comedian whose name might as well be Michael Scott.  Hire the director of a dozen Will Ferrell movies to create a thriller about the collapse of the global economy.  Base the entire plot around financial principles that only .01% of Americans understand.  Break the 4th wall continually, especially with celebrity cameos that are purposely placed to make audiences feel dumb.  And to top it all off, make the run time over two hours, filled with jargon & banks & concepts that no one in their right might can possibly find interesting.  Sound like a recipe for one of the best films of the year?  Spoiler Alert: it is.

2007 brought the United States one of the biggest economic disasters since the Great Depression, hinging on the collapse of the housing market, an institution that had become the bedrock of the global marketplace.  Banks went under, millions lost their homes, prices skyrocketed, and the Democrats won the American election as a direct result of serious issues that had been boiling under a lid for a decade, something that almost no one saw coming.  But, for a crafty few, this disaster meant giant personal profits.  A handful of brilliant minds saw the collapse coming, understood that the housing market was build on shaky loans, and so insanely bet against an institution that had been solid as a rock since 1776.  This is their story. Genius.  Pure genius.  But you know who’s not a genius?  Me, for predicting that this movie would fail.  Take a look at this trailer and at my thoughts on the film in September of last year.  I saw the ingredients, saw how the cast looked to be mismanaged, knew the director, heard the boring plot.  It looked like a complete mess, a story that was destined to be mishandled and wasn’t that interesting in the first place.  Boy does the world have a way of putting you in your place sometimes, and man am I glad.  The Big Short is a brilliant film, one that should be considered as a front-runner for Best Picture.  We’ll see what the Committee ultimately decides, but it’ll stand on my list as one of the best of the year.

The cast is phenomenal, Carell as the powerful lead, Gosling as the narrator, Bale as the savant, Pitt as the solid side character, with peripheral players serving it up as well: Rafe Spall, Jeremy Strong, Melissa Leo, Finn Wittrock, John Magaro.  And then there were the cameos, placed to bring a little levity to a heavy dose of number-crunching and to explain the almost unexplainable: Margot Robbie, Anthony Bourdain, Selena Gomez.  I’m not one to enjoy having concepts explained to me in a movie; tell me with your acting, not with obvious cues.  But in a film that was part reenactment, it was either think of a clever way to explain some of the technical aspects or have one character turn to the other and say, “by ‘shorting’ you must mean ‘betting against’, a term we bankers use quite often.”  No, the filmmakers did what they had to do, but crafted the entire film as one giant aside in a way that worked.  And perhaps that’s an understatement; it worked to perfection.  The Big Short is hilarious, witty, honest, fast, forces you to think, and is, above all, the truth.  I don’t know how they told this story with this much humor & captivation, but I applaud the entire cast & crew for pulling off the coup of the century.