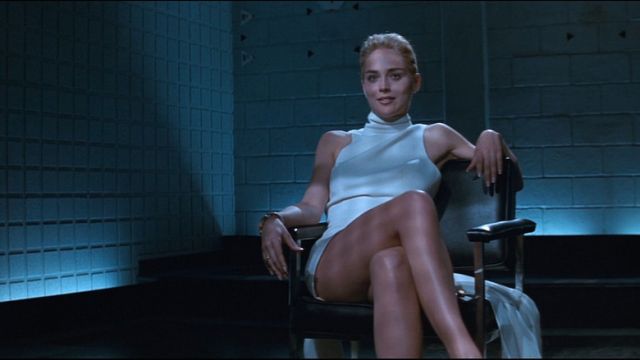 I’m not sure any movie has ever been more 90s than Basic Instinct, the epitome of a sexy thriller with just enough flare and flash.  It’s a ridiculous and over-the-top thrill ride, but then that’s what we wanted back then, that’s what was popular, and nothing nailed the genre better than this flick.  I’ve seen some done extremely poorly (Color of Night) and some done just fine (Bad Influence), but few have ever been able to make the impact that Basic Instinct did, and still does, with a sequel and a cult following that’s lasted over 25 years.  This is the type of movie I tried to sneak and watch when I was younger, this and any USA Network original that looked like it might have some skin; cheap thrills, but hey that’s what this movie is all about.

Detective Nick Curran is in trouble again, after he’s involved in a shooting that gets him steady appointments with a shrink and his name in the papers for a cycle.  He’s a loose cannon, can’t be trusted, can get really aggressive, but is also a good cop, underneath the rough exterior.  His latest case will take all his patience and prowess, if he ever wants to solve the crime of the century.  A rock star is murdered and the obvious suspect is his girlfriend, an author who has written a book about a rock star getting killed by his girlfriend.  Why would she murder someone the same way a character in her book did, isn’t that plain stupid, or is it somehow brilliant?  And as Nick falls for the lovely Catherine, he’ll find himself confused about who’s good, who’s evil, and if any of it matters anyway.

So 90s, so sexy, so silly; that’s why Basic Instinct is a classic.  We all know the scene when Sharon Stone exposes herself, but really nudity abounds, including from Jeanne Tripplehorn, so it’s no shocker to see another body part once the action really gets started.  Sex scenes, gruesome killings, car chases, cops everywhere; it’s a wild ride, but that’s exactly what Verhoeven wanted to bring us, and he succeeded.  Speaking of, what an odd career this director has had (Flesh+Blood, RoboCop, Total Recall, Basic Instinct, Showgirls, Starship Troopers, Hollow Man, Black Book, Elle), but what an interesting one too; I guess he just might be a genius in disguise, perhaps we should start appreciating him already.  Basic Instinct is fun and frivolous, with a touch of actual good acting to boot and some iconic scenes that we’ll never forget.  It’s time to give it the credit its due and to enjoy despite our misgivings.